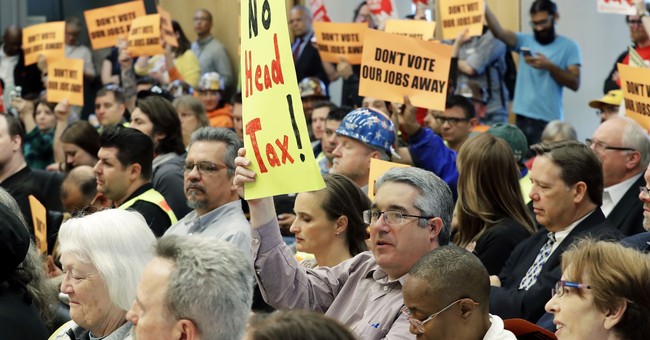 Seattle has a homelessness problem. The city that raised the minimum wage to boost property only ended up hurting its workers: fewer hours worked and fewer job opportunities available. The experiment has been so bad that USA Today issued a warning: take it slow with these wage hikes.  So, with another social ill infesting the city, how will Seattle combat it? Well, by taxing businesses of course. The city council voted unanimously—9-0—to tax businesses in order to subsidize homeless people fund (via Associated Press):

Seattle leaders on Monday unanimously approved a tax on large businesses such as Amazon and Starbucks to fund the fight against homelessness after weeks of heated debate and raucous hearings.

The City Council backed a compromise plan that will charge large businesses about $275 per full-time worker each year, lower than the $500 per worker initially proposed. It would raise about $48 million a year to pay for affordable housing and homeless services.

Council members who sponsored the initial proposal said the amount wasn’t enough to address urgent housing needs but conceded they couldn’t get the six votes to override a potential veto by the mayor.

The compromise measure emerged over the weekend after Mayor Jenny Durkan indicated Friday that she wouldn’t support the tax at the higher rate.

Nearly 600 large employers making at least $20 million in gross revenue would pay the tax that would begin in 2019. Amazon, the city’s largest employer with 45,000 workers, would take the biggest hit.

The debate over who should pay to solve a housing crisis exacerbated by Seattle’s rapid economic growth comes amid skyrocketing rents and rising homelessness. The Seattle region had the third-highest number of homeless people in the U.S. and saw 169 homeless deaths in 2017.

Yet, not everyone is onboard with this move. It would seem the law perplexes some labor unions.

John Boufford with the International Union of Painters and Allied Trades said he didn’t understand rhetoric against Amazon, which he noted provides good jobs for thousands of people.

“They’re driving this economic engine,” he said. “I’m confused about why the city of Seattle is fostering an adversarial relationship with businesses in this city.”

They couldn’t help their workers with wage hikes, and now they’re screwing over economic engines—businesses—because there are homeless people all over the place. Oh, and they obviously don’t know how to deal with them.  Seattle should be a place for businesses to come, but the council seems content with passing laws that will shun this city from economic opportunities.