DHS Secretary To Democratic Senator: Fighting Illegal Immigration Is Not A 'Philosophy,' It's The Law 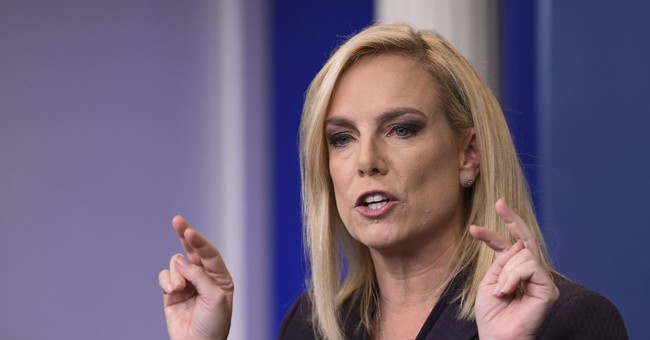 Call it what you want, but is this not a window into how far left Democrats have gone on immigration? Fighting illegal immigration is a philosophy? Well, that’s what Sen. Patty Murray (D-WA) said in a brief, but heated exchange with Department of Homeland Security Secretary Kirstjen Nielsen, who testified before the Senate Homeland Security Appropriations Subcommittee yesterday.

Thank you @SenatorTester and @SenCapito for hosting me at the Homeland Security Appropriations Subcommittee today to discuss @DHSgov budget and priorities, including the need for additional resources at the border. pic.twitter.com/cAQtspwtKr

Sen. Murray wanted to know if DHS was exploring alternative methods other than detention to save taxpayer dollars concerning pregnant women who are caught at the border. Nielsen said that they utilize ankle bracelets, but added that if a pick up repeat offenders of those crossing into the U.S. illegally, or have been charged with a crime worthy of prosecution, they turn them over the marshals. That ends any option for so-called alternative methods to detention. It’s when the DHS secretary reiterated that it’s illegal to enter the U.S. illegally that Murray got snippy (via NTK Network):

Nielsen explained that no matter the method, the U.S. government will deport those caught in the United States illegally.

Murray interrupted her, cutting in, “I know what your philosophy is.”

Nielsen also got into an exchange wit Sen. Pat Leahy (D-VT) (via The Hill)

Sen. Patrick Leahy (D-Vt.), the ranking member of the Senate Appropriations Committee, accused Nielsen of failing to follow up as promised to questions about a controversial report asserting that the 402 of 549 people convicted of international terrorism in the U.S. were foreign-born.

“It’s been four months, even though you stated you would get back to me, so let me try again,” Leahy began, before diving into questions about the report.

After Nielsen reiterated a commitment to follow up with him, Leahy interrupted her:

Nielsen said she did not have data on how many of the 402 foreign-born persons in the Homeland Security report came from countries listed in President Trump’s travel ban, nor how many came to the United States through the diversity visa lottery, which the Trump administration has framed as a security threat.

“I do not have that information with me today, sir,” Nielsen said.

It’s no wonder why this issue catapulted Donald Trump to the top of the GOP primary field in 2016, and into the White House.