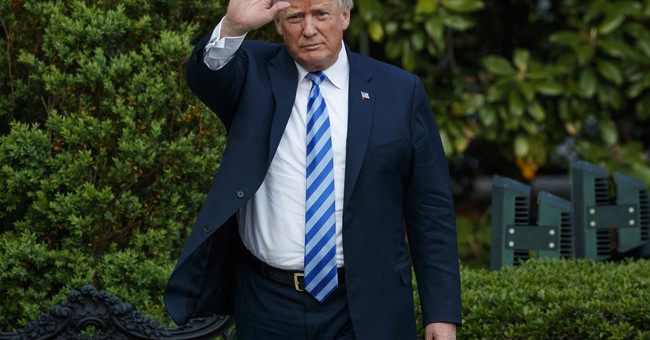 President Donald Trump has withdrawn the U.S. from the shoddy and utterly laughable nuclear agreement with Iran. The world is ending. Iran won’t trust us anymore, and who said they ever did. This is a state-sponsor of terrorism. Who cares how they feel? Who in their right mind thought this agreement had a long shelf life? Even some Democrats thought the deal was straight garbage. So, is the world aflame? No, but the Congressional Budget Office has reported that the Trump White House can claim credit for having the largest monthly budget surplus ever. You can thank the Trump tax reform, which led to a better job creating and investment climate, which lead to solid economic growth. Consumer confidence is at record highs, as is confidence among small business owners. It’s amazing how these figures can just turn around once you get a president who knows how to create jobs, get out of the way, and cheer on the country. It’s remarkable—and Obama was none of those things. And he will never be one of those things (via Market Watch):

Record tax receipts will lead to the largest-ever monthly budget surplus for the federal government, congressional analysts said in a new report, as Americans hand over more money to Washington.

The nonpartisan Congressional Budget Office estimates the April surplus will total $218 billion, breaking the prior record of nearly $190 billion notched in April 2001.

Greater-than-expected tax receipts drove the surplus, CBO said, noting the record $515 billion in receipts for the month was as much as $40 billion more than the agency estimated about a month ago.

The agency chalked up the difference to greater payments of individual income taxes in April, when tax returns and certain taxpayers’ quarterly estimated payments are due. The reasons for higher payments were twofold, CBO said.

The news is even better for African Americans. Amid reports that opinion of Trump among African-Americans has improved dramatically since Kanye West donned his MAGA hat and declared his love for his "brother," the unemployment rate among black Americans has now hit a record low.

While it's not quite record-setting, the jobless rate among Hispanics has now tied a 12-year low at 4.8%.

So, what exactly is the problem? Oh right, for liberals, Hillary still isn’t president. For everyone else, things are going well. Even CNN’s poll was able to find that out as well. Yeah, I know lefties; Trump’s approval ratings are lackluster. I truly think it’s a personality test. Voters may not like him, but they sure like his policies. The project for this year and 2020 is how does Trump’s team thread the needle to ensure a boost in American economic performance can add some juice to those approval numbers.

Everything is on fire. https://t.co/TBm3zDB5uR

57% say things are going well in the US today -- up from 49% saying the same in February -- which is the largest proportion to say so since January of 2007. https://t.co/FI4hYqYvP0 pic.twitter.com/Uoea1xJmXE