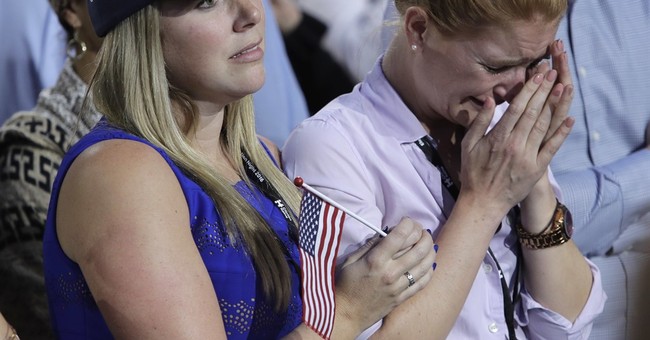 They still can’t get over it. They can’t. The talking heads for the Democratic Party say let’s move on from 2016, but Hillary Clinton, her inner circle, and the Democratic National Committee keep bringing us back there. In the process, they reopen the wounds of 2016, the internal campaign strife, the rift with the progressive Left, and the most delicious fact: Hillary Clinton will never be president. Still, the tantrum continues with this lawsuit filed by the cash-strapped and virtually bankrupt DNC that alleges the Trump campaign colluded with the Russians and Wikileaks to tilt the election (via WaPo):

The Democratic National Committee filed a multimillion-dollar lawsuit Friday against the Russian government, the Trump campaign and the WikiLeaks organization alleging a far-reaching conspiracy to disrupt the 2016 campaign and tilt the election to Donald Trump.

The complaint, filed in federal district court in Manhattan, alleges that top Trump campaign officials conspired with the Russian government and its military spy agency to hurt Democratic presidential nominee Hillary Clinton and help Trump by hacking the computer networks of the Democratic Party and disseminating stolen material found there.

“During the 2016 presidential campaign, Russia launched an all-out assault on our democracy, and it found a willing and active partner in Donald Trump’s campaign,” DNC Chairman Tom Perez said in a statement.

“This constituted an act of unprecedented treachery: the campaign of a nominee for President of the United States in league with a hostile foreign power to bolster its own chance to win the presidency,” he said.

The case asserts that the Russian hacking campaign — combined with Trump associates’ contacts with Russia and the campaign’s public cheerleading of the hacks — amounted to an illegal conspiracy to interfere in the election that caused serious damage to the Democratic Party.

Folks, I’m sure you know this by now—there is no evidence of collusion. None. It’s been over a year and the smoking gun has yet to be found, probably because there never was one. Even the latest memos then-FBI Director James Comey has been diluted in the news cycle because there was nothing in there that would suggest the Trump camp colluded with the Russians. Also, Comey said he never felt threatened or obstructed by Trump. So, no collusion and no obstruction, which is how President Trump responded to the disclosure of the memos last night, delivering another blow to the second front in the Democrats’ long game of impeachment: obstruction of justice.

The truth shall set you free, and that has to do with Hillary Rodham Clinton was a terrible candidate, an abysmal campaigner, and one who had no economic message. Oh, and calling half the country deplorable for supporting the Republican candidate didn’t help either. Russia didn’t tilt the election. No vote tallies were altered. She just lost the election. Even James Comey said Trump was elected legitimately.

Comey suggests he released the letter saying he was reopening the investigation into Hillary in October 2017 because it was his assumption she was going to win.

"If I hide this...she’ll be illegitimate the moment she’s elected, the moment this comes out." pic.twitter.com/muKuEDJ790

This coming from a man who admits that the rebooted email probe in October that many Democrats say, cost Hillary the election (it didn’t), was done based on polling. In an interview with ABC News’s George Stephanopoulos, who is a former Clinton operative by the way, Comey pretty much said that the polls suggested Clinton would win, and that this detail needed to be disclosed in order to prevent a de-legitimization of the presidency that never happened. Law and order based on polling—that’s unconscionable. Also, if this was done as a layup for an assumed Clinton presidency, her people didn’t see it that way. Hillary's still railing against him. Former Senate Minority Leader Harry Reid (D-NV) singled him out for blowing the election for Hillary. None of this is true.

Hillary lost because she was a terrible candidate—and that’s not to say Trump was a stronger candidate. In many ways he wasn’t, but she was the past. She was inauthentic. And she, as we later discovered, is an insufferable progressive elitist snob who after blaming Comey, Obama, Sanders, Obama, the FBI, the media, the DNC, and sexism—decided to tear into Trump supporters, calling them backwards and living in places that don’t matter. It’s deplorables 2.0. So, if you’re wondering why Clinton failed at the cross-party appeal—Trump was able to get millions of Obama voters to vote for him—here’s your answer. This lawsuit is a clown show, much like the Democratic Party and this investigation into Russian collusion.