NYT CEO: Our Paper’s Cozying Up To Brutal North Korea Was Good Reporting 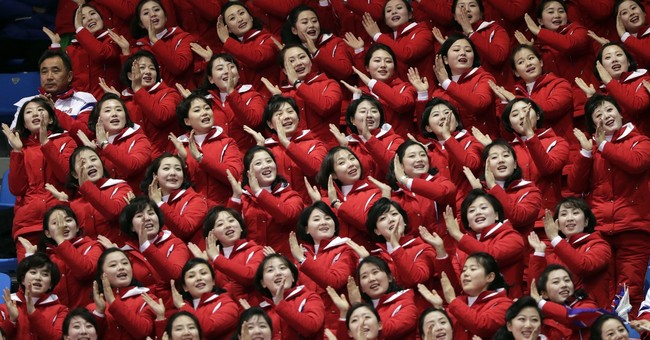 Our intern Chris touched upon this, but it has to be repeated. What has happened over the past couple of days during the 2018 Winter Olympics in Pyeongchang, South Korea has been an absolute disgrace for the news media. North Korea’s brutal dictator, Kim Jong-un, sent his sister, Kim Yo-jong, to represent his country in the games. The media fawned over her. She’s winning diplomatic gold to look at her giving Vice President Mike Pence the death stare, using this murderous clan of characters as a proxy to attack the Trump administration. Keep in mind that the South Korean president, Moon Jae-in, gave the Trump White House “big credit” for bringing the North Koreans to the table of the first inter-Korea talks in a couple years. No military exercises would be held and the peninsula’s tensions were greatly de-escalated prior to the start of the games. Yet, liberals still seem to think Trump is gunning for war with North Korea.

I am deeply saddened by how my profession has normalized and glamorized this murderous regime.
And then we wonder why no one trusts us. pic.twitter.com/pMKVPEvOWP

Oh and here are articles from a few weeks ago warning that NK would use the Olympics as a propaganda offensive. Good job, guys. 1/4 pic.twitter.com/pJyk0OyfuW

The North Korean cheer squad’s presence was impossible for even the skaters to ignore.https://t.co/gBhXRn0kYH pic.twitter.com/mKzNAwaUqZ

wtf is going on? pic.twitter.com/IHoG4AdZYg

Is every single publication going to do this? Because it sure looks like it. https://t.co/xMj4TOPiFM

Seems like @HeerJeet deleted this tweet. Thanks for showing everyone you’re a moron and a scumbag. pic.twitter.com/jT2fBLnJCd

Not surprising that so many of the people who have wondered aloud if we were quite literally living in “The Handmaid’s Tale” also can’t work out whether or not Donald Trump and Mike Pence are better than the North Korean dictatorship.

Y'know it's possible the people who can't tell the difference between murderous tyrants and Mike Pence just aren't good people. No need to overthink this. https://t.co/P0REQRlL21

She is a senior leader in a hideously oppressive regime that imprisons and starves its people. She is complicit in these atrocities. She’s not Kate Middleton. https://t.co/9Qb6bwXc81

How is every major outlet gleefully pushing North Korean propaganda? This is bizarre. Gee. I wonder why these people are so coordinated? I'm sure it's all voluntary. https://t.co/D4wFTGWuZv

Then, this appalling fawning over North Korea’s cohort of brainwashed cheerleaders. For all the criticism about the Trump administration cozying up to Putin or authoritarian leaders, the news media surely kicked it up a notch by normalizing one of the most brutal regimes on the planet just to take a swipe at the Trump administration. Of all places, one of the few media outlets to trash North Korea for the thugs that they are was Buzzfeed, who noted a) they enslaved their own people; b) they have gulags; c) she’s part of the Propaganda and Agitation Department; d) her brother probably killed his half-brother; and e) North Korea has been blamed for the death of U.S. college student Otto Warmbier.

Bethany Mandel, who raises money and works with Liberty In North Korea, which helps refugees escape that communist hellhole of a nation, was also disturbed by the news media’s lovefest with North Korea:

The enemy of your enemy is not your friend. Kim Yo Jong, deputy director of the Propaganda and Agitation Department of North Korea, and sister of Kim Jong Un, is no exception.

This is, apparently, news to the news media. As the Winter Olympics opened in South Korea, US reporters and analysts gave Kim the TMZ treatment, going so far as to liken her to Ivanka Trump

That Ivanka comparison, by the way, brought to you by the Washington Post. A dispatch on Kim from Anna Fifield began, “They marveled at her barely-there makeup and her lack of bling. They commented on her plain black outfits and simple purse. They noted the flower-shaped clip that kept her hair back in a no-nonsense style.”

Strange reading a red carpet-like report about a member of a regime that has concentration camps the size of Los Angeles, where children have been secretly photographed starving in the streets and whose leader uses anti-aircraft weaponry to execute his political enemies.

I can report South Koreans here in Pyeongchang are not as enthralled with Kim Yo Jong and the North Korean cheerleaders as it seems some media are back home.

Something about N.K. killing, starving, & imprisoning its people while threatening South Korea with nuclear annihilation.

And it’s not like they don’t know about this. North Korea’s endless slate of human rights abuses has been reported in multiple outlets here, here, here, and here. For The New York Times, they had this headline: “Kim Jong-un’s Sister Turns On the Charm, Taking Pence’s Spotlight.” The response from their CEO, Mark Thompson, on the criticism lobbed at the news media for their North Korea coverage was literally a shoulder shrug.

Asked about criticism of this piece, NYT Co. CEO tells CNBC "it felt like good reporting to me" https://t.co/EEhAuC2dWG

In a follow up question, when asked if he would have liked a paragraph on the brutal North Korea regime in the story, the NYT CEO noted that the paper covers NK routinely & no reader "could think for a second that the Times doesn't understand about human rights abuses"

NYT Co. CEO Thompson: "It's absurd to imagine you have to pack everything about your coverage of a country into every single story, that's a very naive and, if I can say, kind of foolish way of looking at news"

“It felt like good reporting to me,” he said.

The Federalist’s Ben Domenech said that the news media has unilaterally declared the American experiment dead, and that means a free for all of sorts—like defending the most despicable people on the planet:

It’d be nice to claim that the American press, while maintaining objectivity and balancing against bias, is still inherently American – that they are patriots who love this country even as they report on its defects. Recall the quote from Daniel Patrick Moynihan while Ambassador to the United Nations: “Am I embarrassed to speak for a less than perfect democracy? Not one bit. Find me a better one. Do I suppose there are societies which are free of sin? No, I don’t. Do I think ours is, on balance, incomparably the most hopeful set of human relations the world has? Yes, I do. Have we done obscene things? Yes, we have. How did our people learn about them? They learned about them in the newspapers.” And that is important.

But we cannot say these things when the American media, time and again, illustrates its utter hatred for the nation and its people in those newspapers and on television. Having judged the American project kaput after the election of Donald Trump, they are now stooping to the level of defending the North Koreans – perhaps the most brutal and heinous regime in the world today – thanks to some side-eye from its minister of propaganda, the sister of Kim Jong Un.

Yeah, this after NBC Sports had to apologize for giving Japan a pat on the back for their brutal occupation of Korea between 1910-1945, wounds that have not healed and probably never will. So, in many areas, the news media, as it has been since Trump’s win, has been a total and utter embarrassment.

Oh, and keep in mind that there are three Americans being detained by North Korea and those cheerleaders that everyone loved. Well, in 2015, 21 were sent to prison camps for speaking about their experience in South Korea. Media, you really know how to pick ‘em.

After a 2005 performance, 21 members of North Korea's cheer squad were sent to a prison camp for speaking about what they saw in South Korea pic.twitter.com/SdgYfCtktW