NBC Op-Ed: Actually, Kennedy Movie Shows How Women Are Mistreated By Republicans Or Something 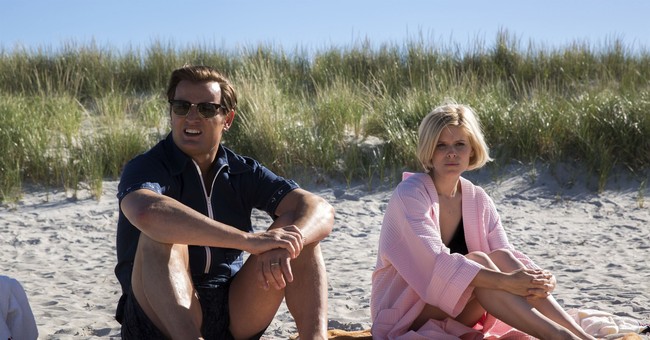 So, what should one take away from the new film Chappaquiddick? It’s that the Left has made progress in treating women better, while the political right lags behind, or something. The movie is about the events during and after the car crash that killed Mary Joe Kopechne. She was one of the late Robert F. Kennedy’s Boiler Room Girls, a cadre of female staffers on his 1968 presidential campaign. Sen. Ted Kennedy hosted a party at his house on Chappaquiddick Island; Kopechne was there. The story goes is that he was driving her to catch the ferry back when he drove off a one-lane bridge. Kennedy was able to get out. Kopechne was trapped inside the car and eventually died. Kennedy dithered for ten hours before calling the authorities about the incident and alas, Chappaquiddick Ted was born. We also know that Kopechne might not have drowned per se, but suffocated, allowing herself to breath though the air pockets in the submerged car. Jill Filipovic, who I often read for the other side, said that this was a terrible incident, though women have been able to make progress within the Democratic Party, and that the GOP still has a ways to go. Still, it’s a bit odd.

“The new movie about the Ted Kennedy's involvement in the death of Mary Jo Kopechne highlights the progress women have made in the Democratic Party,” reads the teaser to the op-ed. Well, if what could arguably be called negligent homicide is the “progress” is it fair to say that neither side really has the moral high ground here. I’m willing to accept that. Both parties are caked in the muck of Washington. The illusion is that Democrats are somehow better because they’re pro-choice, pro-equal pay, and overall liberal in their politics. It’s that disposition that has afforded many a Democrat a pass in the press and from within the party, situation depending. At least right now, she argues—Democrats are cleaning house of their bad boys (via NBC News):

There is almost no question that even a politically-connected man could not, in 2018, drive a car carrying a young women into a river, leave her to die and still retain his seat as a United States Senator from the Democratic Party. Former Sen. Al Franken, who was about as universally beloved as anyone gets on the left, was pressured to resign his office after allegations of sexual harassment by multiple women were augmented by a photo of him pretending to grope a sleeping woman on a U.S.O. tour. Democrats, mostly unelected, may continue to debate whether there should have been a more thorough investigation before members of his own party began pressuring him to resign – but he’s still gone.

And, when sexual harassment and assault allegations surfaced against Hollywood luminary and long-time megadonor Harvey Weinstein, Democratic politicians took the donations they received from him and turned them over to charity.

The left does continue to struggle with how to treat misdeeds by powerful men with whom it is politically aligned, and male misbehavior transcends political ideology. But there is no question that Democrats are cleaning house.

You can’t say the same about the American right. Our current president has been accused of sexual misconduct and assault nearly two dozen times, and has openly bragged about grabbing women’s genitals without consent. An accused child molester nearly won a senate seat in Alabama, and enjoyed the support of the state GOP. Steve Wynn, the billionaire casino tycoon and Republican benefactor, had to step down as CEO of his company in light of dozens of sexual harassment and assault allegations against him, but the some Republicans to whom he donated have not returned campaign donations from him.

Mary Jo Kopechne’s death, and the total lack of consequences that befell Kennedy in its aftermath, remained a right-wing talking point for years and was used by conservatives as a kind of feminist gotcha that was eventually only superseded by allegations sexual harassment and assault against Bill Clinton. Still, when feminists point out our current president’s misogyny and the deep hypocrisy of his base, the rebuttals range from Juanita Broaddrick to Chappaquiddick. The argument seems to be: You guys did it, so now we get to, too.

Leaving aside the total moral bankruptcy of this position, it’s telling that the most recent right-wing sexual assault gotcha is a quarter-century old. Democrats and liberals have been, and continue to be, as guilty as anyone when it comes to powerful men abusing women for sport. But as women have gained more power in progressive politics, and as feminists in particular have had a stronger influence on liberal culture and Democratic policy, the old rules of white male impunity are being eclipsed by new expectations of equality and fundamentally decent behavior. Men on the left still get away with far too much, but more and more of them are being held accountable than ever.

Is leaving a woman to drown in a channel and not reporting it for 10 hours the basis for measure? https://t.co/X9PkWW4NpR

ah, yes. the *real* takeaway from the Chappaquiddick story is that Republicans mistreat women. https://t.co/CbLh3j0In3

Well, for starters, who thinks that politics is anything but a morally bankrupt business? And while some of the right’s recent unscrupulous characters have made national headlines, like Roy Moore, none of them killed or was credibly accused of rape like the Kennedys and Clintons respectively. Also, the notion that women have only benefitted in Democratic circles is absurd. A woman is running DHS, representing us in the United Nations, and taking key leadership positions on the Hill (i.e. Rep. Cathy McMorris Rodgers (R-WA)). The youngest woman ever elected to Congress, Elise Stefanik, is a Republican. Oh, and one of her opponents had this to say about her:

A Democratic congressional candidate in New York believes Rep. Elise Stefanik, R-N.Y., is a "child" and said he, like others, "have some of a sexist in us" after he was condemned for comments made about the Republican congresswoman in July.

"Elise, I recognize her, I'm not going to say a little girl, I recognize her as a child, and it has nothing to do with her age. I see her as a child because she's a child," Steve Krieg said during a candidate forum Oct. 3. "She thinks like a child. She has people set things up for her. She has people put their words in her mouth and she happily repeats them. I think, recognizing her, I would go after her in that way. I apologize if that's mean, but that's how I would do it."

"I have been accused of being a sexist for calling Elise a little girl," he said. "And I probably deserve to be called a sexist. I think most of us, if we admit it, have some of a sexist in us, some of the racist in us. It's something, if we're decent people we recognize in ourselves and we struggle with it all of our lives."

This is my favorite game: If Krieg was a Republican, this would be a days long story about sexism. But Stefanik is the Republican, so have at it ripping her apart. And around and around we go. Now, there was a backlash against these remarks; Krieg changed his party affiliation to Independent. Still, the Franken example is absurd. Democrats needed to have the attacks and media laser focused on Roy Moore, the Alabama Republican Senate candidate, who faced past serious allegations of sexual misconduct with teenage girls. Franken and Rep. John Conyers (D-MI) were a weakness on the flanks with this Democratic offensive. You couldn’t attack Moore without defending Franken and Conyers’ sexual misconduct allegations. So, they had to get rid of these guys and they did. It was not because they wanted to stand united with the sisterhood. This was politics. If Doug Jones, the Democratic candidate, didn’t have a shot in hell, nothing would have happened. Also, while some feminists wrote about the Bill Clinton reckoning, which was a way to atone for the sins of saying ‘support Bill even though he might have raped someone because he’s a liberal’ in the 1990s, it’s hard not to see this again as a way to shore up the flanks of the narrative when the Me Too moment reached its height. With Bill and even former Hollywood heavyweight Harvey Weinstein, it’s hard to take the initial reactions seriously—all these folks knew and did nothing about these guys’ horrific behavior.

In Missouri, the Republican governor, Eric Greitens, has been hit with a rather lurid sex scandal and the state legislature is looking into whether they’ll impeach him. He’s already been indicted on invasion of privacy charges, with the Republican Senate candidate, state Attorney General Josh Hawley, calling for Greitens to resign. Is that not accountability? I’ll bet that impeachment motions will be filed, as Greitens has refused to resign.

Most if not all cases of Democratic accountability were ones of political expediency. They either needed to win an election or make sure there were no holes in the narrative pitching. Democrats giving Bill Clinton a pass on his sexual harassment and alleged assault charges isn’t just some right wing rebuttal, it was an explicitly case of the Left tolerating rape culture to push an agenda that was to their liking. Have Republicans done this? I’m sure, which is why these pious op-eds about how great women have done under Democratic Party politics when they’ve been harassed, assaulted (allegedly), and killed, are a bit lacking in self-awareness.

Oh, and about that Franken accountability part—after Jones beat Moore in Alabama, Democrats all of a sudden regretted pressuring Franken to hit the road. For one Minnesota woman, she lobbed allegations against a Democratic state senator, who resigned, but was then tethered to the Franken fallout. Now, no one wants anything to do with her (via Free Beacon):

In November 2017, Lindsey Port and another woman spoke out about being grabbed from behind by State Sen. Dan Schoen at the Democratic-Farmer-Labor Party event two years earlier. The allegation, part of the larger #MeToo movement, led to Schoen's resignation.

But shortly thereafter, in mid-November, Franken faced sexual harassment allegations of his own and eventually resigned in January. Even though Port had nothing to do with those charges, the Minnesota Post reports she received backlash regardless.

"People started suggesting Franken’s accusers were paid to take him down, and before long, Port said she was being accused of being paid as well.

I honestly think the most frustrating part of it has been not only Democrats ?this is our team, these are the people who are supposed to be with us ?but it has been primarily women," she said.

This pretty much captures that cartoon with a dog sipping coffee in a kitchen engulfed in flames saying, “this is fine.” Maybe it’s more accurate to say that the whole political class has a long way to go.