It's No Shocker The Roseanne Reboot Did So Well 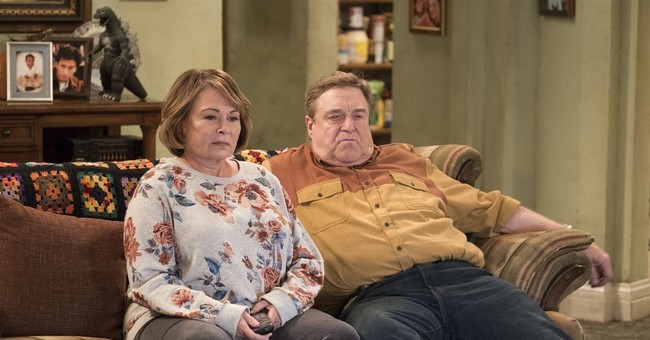 It should be no shocker that Roseanne did well. The March 27 debut (a back-to-back episode premiere) of the rebooted sitcom garnered huge ratings, with 25 million people tuning in last week. After months of Trump bashing from the liberal elite of Hollywood and late night television, the rest of the country finally had a program they could watch without being spit on by the insufferable progressives that dominate entertainment.

There is another view that Roseanne did well because television is going through a reboot kick, with Will and Grace and The X-Files, rather than Trump supporters flocking to the show. Fair point, except where Roseanne dominated were in areas where President Donald Trump reigns supreme (via Deadline):

Both Trump and Roseanne were able to tap into the often overlooked and underserved working-class audience, especially the portion that holds mostly conservative views. Not surprisingly, the top TV markets where Roseanne delivered its highest ratings were in states handily carried by Trump in the election. No. 1 was Tulsa in Oklahoma, which Trump won with 65.3% of the vote. It was followed by Cincinnati, Ohio and Kansas City, Missouri. The only marquee city from a blue state in the Top 10 was Chicago at No. 5 — the area where the series is set. ABC focused some of its marketing efforts in the region with a preview of the revival at the 54th Chicago International Film Festival.

The top market of the country, New York, was not in the Top 20; No.2 Los Angeles was not in the Top 30. And yet, Roseanne delivered the highest demo rating for any comedy telecast in 3 1/2 years, since the fall 2014 season premiere of TV’s biggest comedy series of the past five years, The Big Bang Theory.

Somehow Roseanne transcended age, recruiting droves of young viewers for a show whose two leads, Roseanne Barr and John Goodman, are both 65, well outside of the 18-49 demo. It tapped into the zeitgeist of Middle America, tackling its economic problems — and political leanings — head-on. There was curiosity how Roseanne would address Trump, which the show did in the first episode. In an encouraging sign, the novelty did not wear off, with the second episode rating even higher than the opener.

Yet, should we be shocked? Roseanne was a window into working class America. Since the show ended in 1997, the show that’s been successful in carrying Middle America into our homes was The Middle, starring Patricia Heaton as Frankie Heck, as she chronicled the trials and tribulations of raising a family in fictional Orson, Indiana. That show has started its ninth and final season, though it first aired in fall of 2009. Last Man Standing with Tim Allen set in Colorado was a highly rated show that was cancelled, with some alleging over political reasons; Allen’s character, Mike Baxter, is a conservative Republican who’s head of marketing for a hunting/outdoors store similar to Cabela’s. With Roseanne, there’s been a discussion at Fox about possibly bringing the show back because—shocker—a lot of American families are like the Baxters, the Hecks, and the Connors. It shows that success can be found outside of the coastal and urban elite of New York and Los Angeles. It seems network executives, like Hillary Clinton, are discovering, or re-discovering, that people actually people live outside of the cities. That there is another America past the beltways—and they can’t afford the daily outings to SoulCycle.

Most Americans don’t have college degrees, they work hard, they raise the families the best they can, and they don’t have the cushy amenities that are awash in Blue America. Only in this dense of bubble could a woman of a family making $200,000 complain about a “malaise” striking her social circle because Donald Trump won the 2016 election. Liberals always say check your privilege to shut up someone who is about to straight up slay their shoddy narrative about the realities of America. Well, that actually applies to their attitudes towards rural America, where, yes—an extra $60 in a paycheck is a big deal. And the fact that one does not have a college degree, works at a plant (or farm or does manual labor), and owns guns doesn’t make them a lesser form of American. I think that’s what’s really killing the coastal elites in the post-Trump era. They’ve discovered that there are millions of Americans who don’t want to be like them, who are happy as they are working hard and supporting their loved ones as best they can. If that means working as a mechanic, then so be it. For some reason, that’s viewed as anathema. So, for these millions of Americans, it must be refreshing to see at least some resemblance of their daily lives on television.