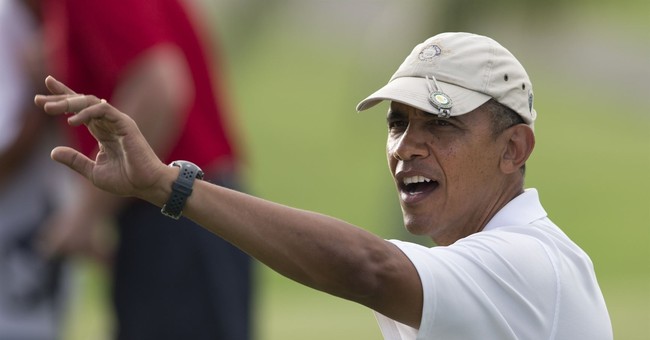 Well, Peter Schweizer, who wrote about the allegedly shady dealings of the Clinton Foundation, is back at it with Secret Empires: How the American Political Class Hides Corruption and Enriches Family and Friends. The Obamas, Bidens, and Mitch McConnell are all detailed with their questionable business practices. For Obama, Schweizer noted that he used executive powers to attack certain industries, which allowed investment firms, who were run by his friends, to buy them at a reduced price (via Washington Examiner):

The book highlighted Marty Nesbitt and Harreld Kirkpatrick III, both former basketball players and close friends of the Obamas, who launched their private equity investment firm Vistria in sync with Obama’s re-election in 2012.

Unlike other investment funds that avoid highly regulated industries, Vistria was specifically focused on the fields that Obama was busy regulating.

“A curious pattern began to emerge,” Schweizer said in his book. “Obama and his administration would attack industries with government power, which led to substantially lower valuations for these companies. Nesbitt and Vistria, or others close to Obama, could then acquire those assets for pennies on the dollar.”

In The New York Post, Schweizer added about how John Kerry and Joe Biden’s kids ran a shady firm that was able to gain unprecedented access to China’s financial titans, even though they were a small firm with little to no track record. And like the Clinton Foundation, some deals coincided with trips to China from Vice President Joe Biden. Hunter Biden and Chris Heinz started the firm, Rosemont, brought on friends, and began to negotiate lucrative deals with governments who were also doing business with the Obama administration.      Below are excerpts from his book:

Joining them in the Rosemont venture was Devon Archer, a longtime Heinz and Kerry friend.

The three friends established a series of related LLCs. The trunk of the tree was Rosemont Capital, the alternative investment fund of the Heinz Family Office. Rosemont Farm is the name of the Heinz family’s 90-acre estate outside Fox Chapel, Pennsylvania.

The small fund grew quickly. According to an email revealed as part of a Securities and Exchange Commission investigation, Rosemont described themselves as “a $2.4 billion private equity firm co-owned by Hunter Biden and Chris Heinz,” with Devon Archer as “Managing Partner.”

Of the various deals in which these Rosemont entities were involved, one of the largest and most troubling concerns was Rosemont Seneca Partners.

Rather than set up shop in New York City, the financial capital of the world, Rosemont Seneca leased space in Washington, DC. They occupied an all-brick building on Wisconsin Avenue, the main thoroughfare of exclusive Georgetown. Their offices would be less than a mile from John and Teresa Kerry’s 23-room Georgetown mansion, and just two miles from both Joe Biden’s office in the White House and his residence at the Naval Observatory.

Rosemont Seneca joined forces in doing business in China with another politically connected consultancy called the Thornton Group. The Massachusetts-based firm is headed by James Bulger, the nephew of the notorious mob hitman James “Whitey” Bulger. Whitey was the leader of the Winter Hill Gang, part of the South Boston mafia.

Less than a year after opening Rosemont Seneca’s doors, Hunter Biden and Devon Archer were in China, having secured access at the highest levels. Thornton Group’s account of the meeting on their Chinese-language website was telling: Chinese executives “extended their warm welcome” to the “Thornton Group, with its US partner Rosemont Seneca chairman Hunter Biden (second son of the now Vice President Joe Biden).”

On one of the first days of December 2013, Hunter Biden was jetting across the Pacific Ocean aboard Air Force Two with his father and daughter Finnegan. The vice president was heading to Asia on an extended official trip. Tensions in the region were on the rise.

The American delegation was visiting Japan, China, and South Korea. But it was the visit to China that had the most potential to generate conflict and controversy. The Obama administration had instituted the “Asia Pivot” in its international strategy, shifting attention away from Europe and toward Asia, where China was flexing its muscles.

For Hunter Biden, the trip coincided with a major deal that Rosemont Seneca was striking with the state-owned Bank of China. From his perspective, the timing couldn’t have been better.

Rosemont Seneca and the Bank of China created a $1 billion investment fund called Bohai Harvest RST (BHR), a name that reflected who was involved. Bohai (or Bo Hai), the innermost gulf of the Yellow Sea, was a reference to the Chinese stake in the company. The “RS” referred to Rosemont Seneca. The “T” was Thornton.

The fund enjoyed an unusual and special status in China. BHR touted its “unique Sino-US shareholding structure” and “the global resources and network” that allowed it to secure investment “opportunities.” Funds were backed by the Chinese government.

In short, the Chinese government was literally funding a business that it co-owned along with the sons of two of America’s most powerful decision makers.