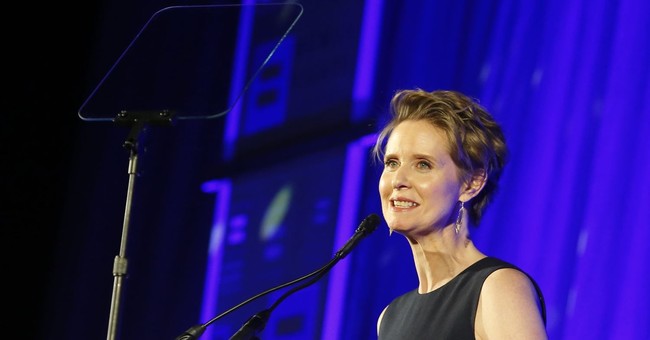 Barely a day has passed since actress Cynthia Nixon announced her gubernatorial bid for New York governor. She’ll be challenging incumbent Democratic Gov. Andrew Cuomo. New York does not have term limits for governor. Is this a serious bid? Could Cuomo, who is part of a New York political dynasty, be bumped off? You’d think it’s possible.

As Cortney wrote yesterday, the conviction of the governor’s former chief of staff, Joseph Percoco, where he’s facing up to 20 years in jail is having an impact. A Siena poll found that 57 percent of New Yorkers gave Cuomo a negative rating for his job performance. Out of that 57 percent, 25 percent gave Cuomo a poor rating. The poll was gauged by using registered voters, but there might be a panic in Albany, given the strong reaction to Nixon’s candidacy from some of the governor’s supporters. Christine Quinn, the former speaker of the New York City Council, called her an “unqualified lesbian.” Quinn is also gay. Now, there's definitely bad blood between the two since Nixon endorsed current NYC Mayor Bill de Blasio over her in 2013. Quinn appears to not have forgotten being passed over for Nixon's endorsement, viewing it, based on her statement, as some sort of betrayal (via NY Post) [emphasis mine]:

In an interview with The Post, Quinn also denounced Nixon for endorsing Bill de Blasio over her in the 2013 Democratic primary for mayor.

“I’m surprised by this race. It’s a flight of fancy on her part,” Quinn said of Nixon’s announcement Monday that she would take on Cuomo in September’s Democratic primary.

Quinn conceded that she and the “Sex and the City” actress both support progressive positions — but added that it takes more than being a reliably leftist celebrity to run the Empire State.

Yeah, identity politics is grating and absurd, but when liberals start using it to claw and one another, it’s downright entertaining. Who cares about either of these women’s private lives? Obviously, Quinn is playing that card in an effort to get under Nixon’s skin. It's never too late to settle scores in politics. The qualifications of Nixon are a legitimate question, but you can see how this race could become ugly. Or, it very well could dissipate into obscurity since Cuomo has more than a commanding lead in the polls, as expected. But man, we just went from zero to twenty with that swipe.