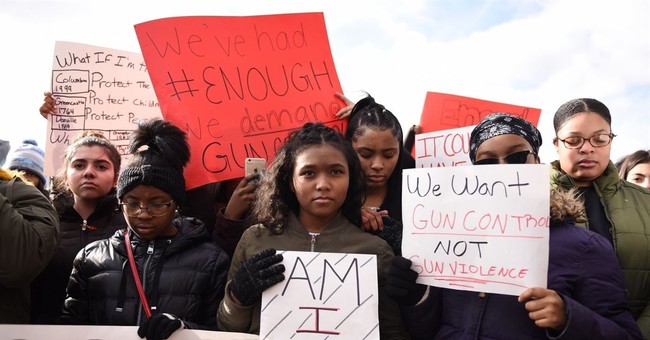 The House of Representatives overwhelming passed a school safety bill in response to the tragic shooting at Marjory Stoneman Douglas High School in Parkland, Florida on February 14. Shooter Nikolas Cruz shot and killed 17 people in that attack. It sparked more calls for new gun control laws. The bill provides more funding for school safety and establishes another tip line to report threats.

There is the Fix NICS legislation that was drafted in response to the church shooting in Sutherland Springs, Texas last December. It has the votes to pass, but Democrats might deep six that because…it actually has a shot of passing. Yes, the House version has a concealed carry reciprocity provision, but while that will certainly be reported as the reason why Fix NICS would fail—there’s the other fact that the Democratic legislative assault on the Second Amendment will end if either bill is signed into law, especially on NICS. That means no new ban on so-called assault weapons, expanded background checks etc, so they want to get as much as they can with this bite of the apple and to maybe use it for the 2018 midterms. And people wonder why nothing gets done in Washington D.C. (via Roll Call):

The bill would authorize $50 million in grant funding for schools to conduct training to prevent student violence, set up anonymous reporting systems for threats and implement other safety protocols. The bill does not appropriate the $50 million, but some of those funds could be included in the upcoming fiscal 2018 omnibus spending bill or fiscal 2019 appropriations measures.

“The best way to keep our students and teachers safe is to give them the tools and the training to recognize the warning signs to prevent violence from ever entering our school grounds,” Rutherford said. “And this bill aims to do just that.”

House GOP leaders signaled that they have no plans to pass any more legislation to address mass shootings.

“It will not be the only bill, because in the Senate we also have the work that this House did back in December, the National Instant Criminal Background Check,” House Majority Leader Kevin McCarthy said, referring to a measure called Fix NICS designed to strengthen existing reporting requirements to the background check system.

That measure was crafted as a response to the mass shooting at a Texas church in which the gunman had a history of domestic violence that the military was aware of but did not report to NICS.

A Senate version of that bill has enough support to pass, based on the more than 60 senators who have signed on as co-sponsors. But the House version includes a provision to allow people with concealed carry permits to carry to their guns across state lines that would prevent it from passing in the Senate.

...but sure, blame the NRA/guns/GOP.#NationalWalkoutDay

Yet, this story is also one that is becoming a rather tragic tale of government failure. State, local, and federal officials failed to act on red flags that were exhibited by this young man. The FBI received a tip on January 5 and didn’t act on it. Local law enforcement was called to his home multiple times, and Cruz was known to have pointed firearms at people. State officials could have committed him when he began to mutilate himself, which would have shown up on a background check. Also, the Obama-era education policy that stressed leniency over discipline shielded Cruz from a criminal record and other measures that could have prevented him from buying guns.