Hillary Staffer On CPAC: ‘I Saw A Big Tent’ 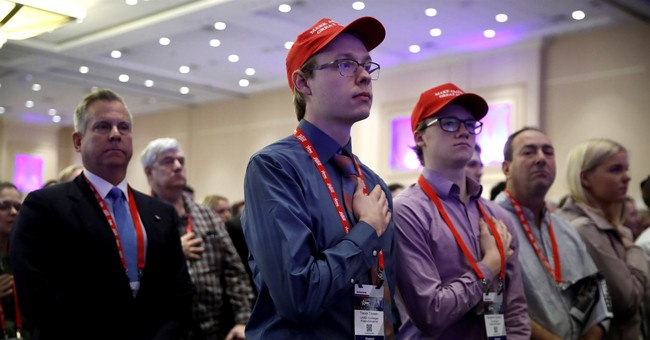 Annafi Wahed, a former Hillary Clinton campaign staffer, ventured into the Conservative Political Action Conference. You would think that she would repeat liberal talking points, bash conservatives, and say we’re all insane. Nope—it was grounded, and she even admitted to being nervous in her initial reaction to the conference. She saw a “big tent” at CPAC, and even wondered if a conservative could venture into a liberal conference in the same welcoming manner (via WSJ):

Where some saw a circus, I saw a big tent. I spoke with Jennifer C. Williams, chairman of the Trenton, N.J., Republican Committee and a transgender activist. Twenty feet away, I spoke with a religious leader who opposes same-sex marriage. While a panelist touted capital punishment, several attendees crowded the Conservatives Concerned About the Death Penalty booth. Hours after President Trump recast Oscar Brown Jr. ’s song “The Snake” as an ugly anti-immigrant parable, several influential Republicans were asking me, a naturalized citizen, how they can support my startup.

In retrospect, I’m embarrassed at how nervous I was when I arrived. I found myself singing along to “God Bless the USA” with a hilariously rowdy group of college Republicans, having nuanced discussions about gun control and education policy with people from all walks of life, nodding my head in agreement with parts of Ben Shapiro’s speech, and coming away with a greater determination to burst ideological media bubbles.

Among liberals, conservatives have a reputation for being closed-minded, even deplorable. But in the Washington Republicans I encountered at CPAC, I found a group of people who acknowledged their party’s shortcomings, genuinely wondered why I left my corporate job to join Mrs. Clinton’s campaign in 2016, and listened to my arguments before defending their own positions.

As I look back on all the people who greeted me warmly, made sure I didn’t get lost in the crowd, and went out of their way to introduce me to their friends, I can’t help but wonder how a Trump supporter would have fared at a Democratic rally. Would someone wearing a MAGA hat be greeted with smiles or suspicion, be listened to or shouted down?

The answer to that question is no. No, of course, liberals would shout down Trump supporters and conservatives at their gatherings, things will be thrown at them, and they would be called racists. With the exception of Ms. Wahed, today’s liberals cannot share space, have relationships with, or even be near someone who voted for Donald Trump and the Republican Party. We’re anathema. Period. Yet, it shows how the ideological roots of the two sides yield entirely different results. The values of the Republican Party are grounded in the rule of law, respect for life, the family, and equalizing opportunities. It’s about hard work and the principles of freedom that are grounded in our founding and the Constitution. There is nothing that’s race-specific about freedom, love of country, and ensuring everyone has the opportunity to make it in America. Anyone can be a conservative, which probably explains why the Left is so aggressive in trying to paint the movement as racist, and call any person of color who identifies as such a race traitor, confused, or someone acting against their own interest. It’s abject nonsense.

The Democratic Party is made up of hyperemotional liberals, who espouse victimhood on a daily basis. Identity politics makes everyone the enemy. White people are natural enemies of…everything. We’re all in the struggle from something. It’s based on anger and envy. They’re seriously the most miserable people on earth, propped up politically by a coastal and urban-based elite that lives by an ethos created by pseudo-intellectuals that push a doctrine of facts being replaced by feelings, safe spaces, and trigger warnings. You have to feel like you’re being put down by something, whether that is white people, the so-called patriarchy, misogyny, sexism, etc. it’s all part of the wheel of victimhood. On the policy front, it’s not about equality of opportunity, but outcome—even if that means trampling on people’s rights to achieve that. Dependency is also another facet of modern progressivism.

The point is there is a more unifying aspect about conservatism and its ideals. I mean who doesn’t like freedom, free markets, free movement of peoples, rule of law, and expanding opportunities for all Americans. On the Left, you cannot be a Republican if you’re gay, black, Asian, a woman, or Hispanic. Says who? Who made that rule among liberals? This is America. We’re free to associate with whom ever based on freethinking and agreement with a certain party’s platform. If it’s not for you, guess what—there’s always other movements to support to voice your opinions. You can’t be part of something because of your gender or race? That’s pure crap. Also, I don’t think there’s much credibility with the Left and their so-called rules for association, given that they continually deny basic facts of biology and paved the way for some white people to identify as black.

Would I like to go to a liberal conference? Sure—but I don’t want to have to deal with the dry cleaning bills after having soda, beer, or water tossed on me.