Wait–The FBI Agents Who Interviewed Michael Flynn Didn't Think He Lied To Them? 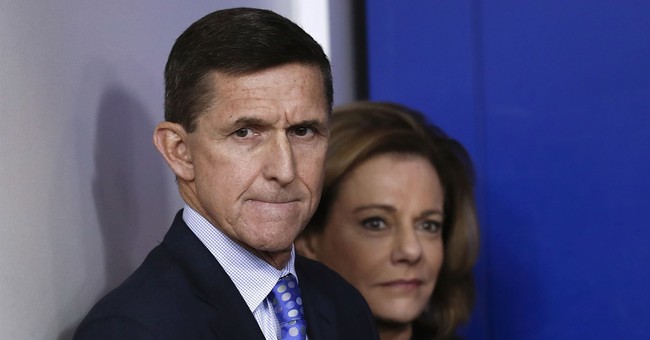 Remember former National Security Adviser Michael Flynn? He’s about to be sentenced for lying to the FBI, but what actually happened here? Flynn’s tenure at the Trump White House was short-lived, marred by leaks (not of his doing) and increased scrutiny concerning Russian collusion. Flynn spoke with then-Russian Ambassador Sergei Kislyak, which is not a crime. It’s your run-of-the-mill diplomatic groundwork established by any incoming administration. The conversation is highly classified, but made its way into the news media. The Department of Justice became involved, as Deputy Attorney General Sally Yates felt that the Flynn-Kislyak conversations were possibly illegal, prompting two FBI agents to interview Flynn on January 24, 2017. They reported back to then-FBI Director James Comey and noted that they felt Flynn did not lie to them. Flynn would resign on February 13. So, what happened? The Washington Examiner’s Byron York had a lengthy piece explaining the whole timeline of the Flynn fiasco that eventually led to him pleading guilty to making false statements to the FBI. But many questions remain, specifically whether the Obama holdovers at DOJ railroaded Flynn. York noted how the DOJ thought a Logan Act violation had occurred.

The point that York and others have mentioned is that his conversations with Kislyak were not illegal. Nothing wrong occurred. Where he did land in hot water was when he wasn’t fully forthcoming about the calls to Vice President Mike Pence (via Washington Examiner):

Despite the high level of classification, word of the Justice Department's concerns got to the press. On Jan. 12, Washington Post columnist David Ignatius reported that Flynn and Kislyak had talked. "What did Flynn say, and did it undercut U.S. sanctions?" Ignatius asked. "The Logan Act (though never enforced) bars U.S. citizens from correspondence intending to influence a foreign government about 'disputes' with the United States. Was its spirit violated?"

Three days later, on Jan. 15, Vice President-elect Mike Pence (remember, this was all happening before the Trump administration took office) denied that Flynn had discussed sanctions with the Russian ambassador. "They [Flynn and Kislyak] did not discuss anything having to do with the United States' decision to expel diplomats or impose censure against Russia," Pence told CBS.

On Jan. 20, Donald Trump became president. On Jan. 22, the Wall Street Journal reported that "U.S. counterintelligence agents have investigated communications" between Flynn and Kislyak. The investigation "aimed to determine the nature of Mr. Flynn's contact with Russian officials and whether such contacts may have violated laws."

On Jan. 24, the Justice Department — the Obama holdover Yates had become the acting attorney general — sent two FBI agents to the White House to question Flynn, who talked to them without a lawyer present.

It has sometimes been asked why Flynn, a man long familiar with the ways of Washington, would talk to the FBI without a lawyer. There seems to be no clear answer. On the one hand, as national security adviser, Flynn had plenty of reasons to talk to the FBI, and he could have reasonably thought the meeting would be about a prosaic issue involved in getting the new Trump National Security Council up and running. On the other hand, the media was filled with talk about the investigation into his conversations with Kislyak, and he might just as reasonably have thought that's what the agents wanted to discuss. In any event, Flynn went ahead without an attorney present.

In addition, it appears the FBI did not tell White House officials, including the National Security Council's legal adviser or the White House counsel, that agents were coming to interview the national security adviser over a potentially criminal matter.

Two days later, on Jan. 26, Yates and a high-ranking colleague went to the White House to tell counsel Don McGahn about the Flynn situation. "The first thing we did was to explain to Mr. McGahn that the underlying conduct that Gen. Flynn had engaged in was problematic in and of itself," Yates testified in a May 2017 appearance before a Senate Judiciary Committee subcommittee. That was an apparent reference to the Logan Act, although Yates never specifically said so. "We took him [McGahn] through in a fair amount of detail of the underlying conduct, what Gen. Flynn had done."

York added that Yates thought Flynn was subject to blackmail; given that the Russians would know that he wasn’t truthful about the discussions over sanctions with Pence. McGahn asked why is this a concern for the DOJ, regarding whether two White House officials lied to one another. On February 14, a day after Flynn resigned, the publication cited a New York Times piece about Obama aides being wary that a secret deal being hashed out between the Trump campaign and the Kremlin. The FBI pretty much killed this theory, saying no such discussions occurred.

At that point, the public still did not know that the Jan. 24 FBI interview of Flynn had taken place. That report came on Feb. 17, when the Washington Post reported the interview in a story headlined, "Flynn told FBI he did not discuss sanctions." That was the piece that noted Flynn was in legal jeopardy, and that, "Lying to the FBI is a felony offense."

Congress, in the meantime, was in the dark about what was going on. Given the intense discussion of the Flynn case in the media, there was no doubt lawmakers were going to want to know what was happening in the Flynn matter, as well as other aspects of the Trump-Russia investigation. (At that point, the FBI had never even publicly acknowledged that there was an investigation into the Trump campaign and Russia.)

So Comey went to Capitol Hill in March to brief lawmakers privately. That is when he told them that the FBI agents who interviewed Flynn did not believe Flynn had lied, or that any inaccuracies in Flynn's answers were intentional. And that is when some lawmakers got the impression that Flynn would not be charged with any crime pertaining to the Jan. 24 interview.

And that’s where this pretty much ends. York adds that Yates went on to becoming acting Attorney General, only to be fired for refusing to defend the president’s constitutional executive order in immigration. Comey was fired in May, and the FBI’s counterintelligence investigation into Russian collusion, which started in July, was taken over by Robert Mueller, tapped by deputy attorney general Rod Rosenstein:

…mystery still surrounds the case. To some Republicans, it appears the Justice Department used a never-enforced law and a convoluted theory as a pretext to question Flynn — and then, when FBI questioners came away believing Flynn had not lied to them, forged ahead with a false-statements prosecution anyway. The Flynn matter is at the very heart of the Trump-Russia affair, and there is still a lot to learn about it.

In fact, this whole investigation has become a massive clown show. Not a single shred of evidence to suggest the Trump campaign colluded with the Russians has arisen after months of investigating by multiple congressional committees. What we do know is that the Hillary Clinton campaign actually funded the effort that led to the Trump dossier, compiled by former British spook Christopher Steele. During the 2016 election, the Clinton crew retained the services of research firm Fusion GPS, who then hired Steele to gather information on this opposition research file. The same documents that were used to obtain a FISA warrant against former foreign policy adviser to Trump, Carter Page. Yeah, a partisan piece of opposition research from a political campaign was used to secure a warrant to spy on someone who had worked on the opposing campaign—all of this under the Obama DOJ mind you. In fact, as this investigation has moved on, we see less about Trump-Russia and more about the endless trip-ups at the FBI, namely the unacceptable levels of bias among top officials involved in some of the most sensitive investigations conducted by the bureau.

Top counterintelligence agent Peter Strzok texted with bureau lawyer Lisa Page tens of thousands of times, slamming Trump—while being involved in the Hillary email probe and the counterintelligence into Russian collusion that began in July of 2016. With Hillary, Page was worried the bureau was going too hard on her, which Strzok agreed. Strzok also mentioned an “insurance policy” from an August 15, 2016 text, which many think is a reference to the Trump dossier. Either way, when Special Counsel Robert Mueller found out about the texts, Strzok was reassigned to human resources in August of 2017.

Bruce Ohr was an associate deputy attorney general and former director of the Organized Crime Drug Enforcement Task Force; he was demoted after it was discovered that he met with Steele and never disclosed it; his wife, Nellie, worked for Fusion GPS during the 2016 campaign as well. So, yes, there may be questions about Flynn’s downfall, but before we get to that—we need to get to the bottom of the memos, FISA, Russian collusion, and the conclusion of this special counsel investigation. This will be a long wait.

Editor's Note: This post has been updated. Some blockquotes were not properly highlighted and some text tweaked to better reflect accuracy.