WSJ Columnist: Would Democrats Fight This Hard To Kill A Memo About A Republican Abusing Wiretaps? 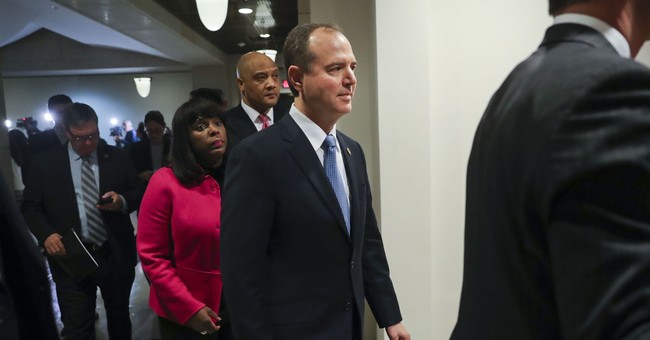 UPDATE: It's here! The memo has been released.

We now know how right @realDonaldTrump was to declassify the Memo. It shows FBI used a partisan campaign document to get a warrant to spy on a rival campaign. And shows the FBI omitted crucial information from a FISA court. No spin can change those basic facts.

The release of the FISA memo is upon us. The four-page document Democrats have maligned as an attempt to undermine the FBI and the Russia investigation alleges egregious abuses, some of which are said to echo that of the KGB. It’s sparked a war between the Department of Justice/FBI and Congress. The White House is now involved, as they’re supportive of releasing the memo. The vote to declassify was held by the House Intelligence Committee on Monday. It passed on a party-line vote. It then undergoes a five-day period in which the president can either support its release or block it. That same day, Deputy Attorney General Rod Rosenstein and FBI Director Christopher Wray failed to convince White House Chief of Staff John Kelly to block the memo’s release. The war is over. The president is signing off on releasing it. Now, the DOJ is continuing to use the media as a means to fight the White House in this decision, which The Wall Street Journal’s Kimberley Strassel described as outrageous.

While Rep. Adam Schiff (D-CA) thinks the memo edits were pernicious and Nancy Pelosi thinks House Intelligence Committee chair Rep. Devin Nunes (R-CA) should be removed from that position, let’s be clear: the edits were at the request of…the Democrats and the FBI. It was a two-word change. This is what we mean by silly clown games in the FISA memo war. The Left is foaming at the mouth from the bath salts.

Strassel also noticed two more things in this ongoing slugfest over the FISA memo. The first observation is that she has never seen this much desperation from Democrats in trying to block this memo. The second is the news media’s intense opposition to transparency, where there is a legitimate allegation lobbed against the FBI/DOJ in this case.

1) I've covered politics a long time. I've never--never--seen anything approaching the desperations Ds have to keep this memo quiet. And as we know that worry about law enforcement (Snowden/Manning) is not their biggest worry, this memo must be damning to the core.

2)Have been in journalism all my life. Have never--never--seen the press corps fight so hard against transparency. Same media that after election wondered if it was out of touch with avg Americans, now ignoring the legit worries so many have about govt. accountability.

3) Every journo should be asked if they'd be fighting this hard against disclosure if it was a Bush DOJ/FBI accused of wiretapping abuses. Of course not. They'd be leading the charge to put it all out. 4th estate is supposed to enlighten the people. Not cover for govt. officials

“I've covered politics a long time. I've never--never--seen anything approaching the desperations Democrats have to keep this memo quiet,” she tweeted. “Have never--never--seen the press corps fight so hard against transparency. Same media that after election wondered if it was out of touch with average Americans, now ignoring the legitimate worries so many have about govt. accountability,” she added.

Strassel also wondered if Democrats would be fighting so hard to kill a memo if a Republican, in her example, Bush; was accused of wiretapping abuses.

The allegation here is that the Trump dossier was used to secure FISA warrants against members of the Trump campaign. The dossier is a largely unverified and uncorroborated document compiled by a former MI6 operative, Christopher Steele, who was contracted by research firm Fusion GPS because the Hillary Clinton campaign paid them. This is a Democrat-funded opposition research expedition—nothing more. So, the DOJ/FBI, then under the Obama administration, used partisan political opposition research that was not fully corroborated to spy on the Trump campaign. That’s the allegation. If true, it's incredibly serious. The documents that could offer clarity remain in the offices of the DOJ/FBI. They’re dragging their feet in releasing those files. FBI Director Wray has read the memo. Two senior FBI officials also said it contains no factual inaccuracies. The FBI/DOJ know what’s going on—and they’re worried. The answer to that angle will be answered soon.