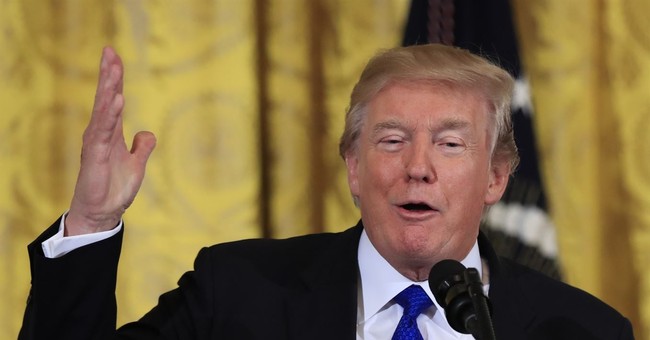 The White House delivered their framework on immigration. Katie has more here. In all, it ends chain migration, provides funding for a border wall, nixes the diversity visa lottery, and provides a pathway to citizenship for 1.8 million illegal aliens on a 10-12 year timeframe. Of course, the progressive base is incensed, with some saying it's "a white supremacist wish list." (via NYT) [emphasis mine]:

Describing the plan as “extremely generous” but a take-it-or-leave-it proposal by the president, White House officials said they hoped it will be embraced by conservatives and centrists in Congress as the first step in an even broader effort to fix the nation’s broken immigration system.

But the plan — drafted by Stephen Miller, the president’s hard-line domestic policy adviser and John F. Kelly, the White House chief of staff — was immediately rejected by Democrats, pro-immigration activists and some Republicans, with some describing it as nothing but an attempt to rid the country of immigrants and close the nation’s borders.

Republican and Democratic senators are working on a narrower immigration plan of their own, hoping that if it can pass the Senate with a strong, bipartisan majority, it would be Mr. Trump who would have the take-it-or-leave-it decision.

“We will oppose it. Most if not all Democrats will oppose it. Some Republicans will, too,” said Frank Sharry, the executive director of America’s Voice, a pro-immigration group. “We are not going to allow Stephen Miller to exploit a crisis that he and his boss created to take a wrecking ball to the Statue of Liberty and enact his nativist wish list.”

Eddie Vale, a Democratic consultant working with a coalition of immigration groups, described the president’s proposal as an effort to sabotage bipartisan talks and win passage of “a white supremacist wish list.”

There was a much more measured response from Senate Republicans. Among those who were trying to revamp our green card system, like Sen. David Perdue (R-GA) and Tom Cotton (R-AR), seem to be open to the agreement, despite intense opposition from hardliners on the right.

In a statement, Sen. Perdue said, “The White House framework is something that both Republicans and Democrats in the House and Senate should be eager to support. We all want a good deal, and here it is.”

Sen. Cotton referred to the framework as “generous and humane.”

The president’s framework is generous and humane, while also being responsible. It protects those eligible for DACA, who are here through no fault of their own. But it also will prevent us from ending up back here in five years by securing the border and putting an end to extended-family chain migration. The president’s willingness to grandfather everyone in the current immigrant backlog also shows he’s serious about reaching a bipartisan solution. I look forward to working with my colleagues to turn the framework into legislation that can pass both the House and the Senate with widespread support.

Sen. Mitch McConnell (R-KY) said the framework “builds upon the four pillars for reform that the president has consistently put forth”:

I want to thank President Trump and his administration for their work on this important issue. This framework builds upon the four pillars for reform that the president has consistently put forth, and indicates what is necessary for the president to sign a bill into law. I am hopeful that as discussions continue in the Senate on the subject of immigration, Members on both sides of the aisle will look to this framework for guidance as they work towards an agreement.

We all agree that Congress needs to act to address those who were brought here illegally through no fault of their own, but we also must make sure that other young people don’t find themselves in the same legal limbo in the future. President Trump’s framework accomplishes these goals and gives federal law enforcement the crucial authorities needed to target criminals. The plan honors the four key pillars to meaningful reform that were agreed to at a bipartisan, bicameral meeting with the President earlier this month. This is a plan that both chambers of Congress and members of both parties should be able to support.

Trump and the Republicans have put something on the table that their base does not like. The Democrats don’t like it because Trump has his name on it, and they will do everything they can to screw him over. In short, he fired the first shot and now they look like the ones who aren’t willing to come to the table if further negotiations get bogged down. The citizenship provision will give hardliners some heartburn, but given the Left’s reaction—it could be something worth considering and debating. Looking past the citizenship provision, the bill is pretty much what has been agreed upon with both parties, even with the border wall. Guy will gave a post tomorrow concerning Democrats putting that back on the table; they withdrew it once they caved on the shutdown fight. Democrats aren't mad about the provisions—DACA recipients get protections and a pathway to citizenship. When it’s all boiled down, it looks like the Left is furious over border security again. We shouldn't be afraid to have that debate.

Sources tell me Stephen Miller had a pretty feisty conference call just now with immigration hardliners. Lots of them hate the proposal. Seems like the WH has managed to piss off just about everyone!