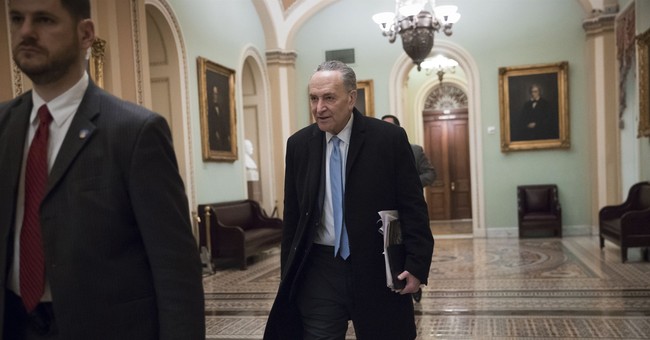 UPDATE II: The spending bill breezed pass the House. It's now off to President Trump's desk for signature (via Politico):

The Senate voted 81-18 to move forward on a bill to fund the government through Feb. 8 after Senate Majority Leader Mitch McConnell (R-Ky.) and Senate Minority Leader Chuck Schumer (D-N.Y.) agreed to end the shutdown and continue to negotiate on immigration and spending matters. If a broader deal is not reached by Feb. 8, the Senate would take up legislation to protect hundreds of thousands of young undocumented immigrants who are losing legal protections, as long as the government remains open.

Later Monday, the stop-gap spending bill passed the Senate 81-18 and was sent to the House for final passage, where it sailed through on a 266-150 vote.

Guy is going to have a more in-depth analysis (UPDATE: You can read it here) on the upcoming vote that will re-open the government. Over the weekend, he spoke with a senior GOP aide who said that the bill they’re taking up now funds everything the Democrats want, albeit with a week less of funding. We’ll have to revisit Shutdown Theater on February 8, but Senate Majority Leader Mitch McConnell has said if this immigration issue is not resolved, votes on it will be held in February before the enforcement deadline hits. In September of 2017, the Trump administration, citing the Deferred Action for Childhood Arrivals program’s constitutionally shaky foundation, opted for a gradual wind down, with a six-month enforcement delay, possibly in the hopes that Congress could pass a fix. Everyone wants to offer DACA protections. There’s a consensus on that, but the Democrats shut down the government over illegal aliens, attaching this issue to matters of the budget that the party historically said was bad government strategy. Even the media put the pressure on Democrats, with CNN and MSNBC, of all places, making sure that their viewers know that the GOP doesn’t really control the Senate in the sense that they need 60 votes to advance anything. It’s becoming increasingly clear that what Democrats wanted funded was included in the House bill, and that they just threw a tantrum because DACA was not resolved. Those are two separate issues.

that's the commitment. now up to Schumer. https://t.co/qSrFZxhhVL

McConnell: "Should these issues not be resolved by the time the funding bill before us expires on Feb. 8, assuming the gvt. remains open, it would be my intention to proceed to legislation that would address DACA, border security and related issues."

Message 1—"The shutdown is Republicans' fault."
Message 2—"It's worth shutting down the government because DACA, etc. is so important."

Instead, there's been a roughly even mix of both. And those messages sort of contradict one another. https://t.co/wjAluDgbaj

If the red state Democrats’ breakaway on the Friday night vote, which fell short, was proof of anything—it could be that the party is getting nervous they’ll be blamed for the shutdown. Even prior to the vote, which is occurring right now, Shutdown Chuck Schumer seems to have been outmaneuvered in this fight, with the added detriment that the Democrats never really had a message for this shutdown because there’s no way to spin something if it’s your fault. At the same time, if they do agree to this new CR the Senate GOP is offering, immigration activists might go ballistic (via AP):

Perhaps the most powerful Democrat in Washington, Schumer has so far succeeded in keeping his party unified in a bid to use the government funding fight to push for protections for some 700,000 young immigrants brought to the U.S. illegally as children. But he has little margin for error in this first major test of his muscle and maneuvering as leader. The pragmatist is balancing the demands of a liberal base eager for a fight with President Donald Trump and the political realities of red-state senators anxious about their re-election prospects this fall.

Some of those senators met with Schumer Sunday morning and urged a compromise to end the shutdown.

“The question is, how do we get out of here in a way that reflects what the majority of the body wants to do,” said Sen. Heidi Heitkamp of North Dakota, who is among the Democrats on the ballot in November. She added: “It is critically important that we get this done today.”

Immigration advocates are hoping Schumer will see that as badge of honor, but there is anxiety about his resolve.

“He went to the mats,” said Frank Sharry, the executive director of the immigration advocacy group America’s Voice. “He had the backbone to lead his caucus into a high-stakes, high risk battle. It thrilled progressives. But if the shutdown ends because Democrats blink first, the era of good feeling quickly will be replaced by anger and disappointment.”

We’ll see what happens. Be sure to read Guy’s analysis on the final vote coming shortly.

McConnell gave them an off ramp & they’re taking it. #SchumerShutdown wasn’t working out well for them... https://t.co/0RZveOtVCP

A Dem familiar with ongoing Senate Dem meeting tells me Dems are going to take the @SenateMajLdr deal and government will reopen today, yes votes will include immigration advocates like @SenatorDurbin.

Schumer declines to say if there’s a deal to reopen govt: “You’ll be hearing from us shortly”

If this was always Senate Democrats' exit strategy - cave in exchange for nothing - they should have just provided the 8 votes on Friday.