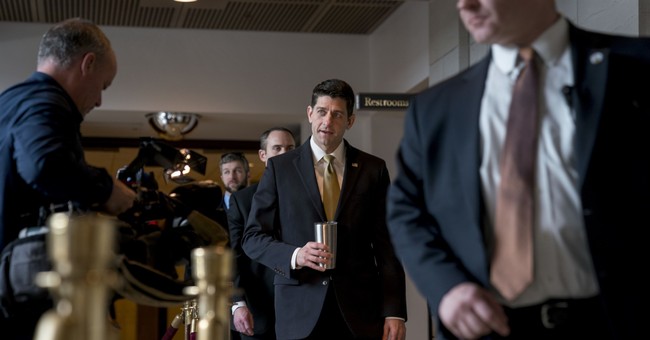 House back in session. Expect vote on interim spending bill between 7:30 & 8 pm et. Four votes in the series. Third vote is on the stopgap spending bill

Hse to convene again shortly after 7 pm et. 4 votes in the series. 3rd vote is vote on the CR to avoid a gov't shutdown. Likely that vote will start sometime after 7:30 pm et & we'll have a result before 8 pm et

Meadows says Freedom Caucus will back interim spending bill. Says this will give Hse time to bring bolstered defense pkg to flr, bust sequestration caps & add $80 billion for the Pentagon. Also want to see if Goodlatte immigration bill can pass the House

Meadows expects a vote in ten days on bolstered defense spending. Says DACA "won't be in exchange for secure borders."

UPDATE II: Bill to avoid government shutdown passed House 230-197. It's expected to fall short in the Senate, however,

A government shutdown still looms even as the House passed a four-week stopgap funding bill Thursday evening, sending the measure to the Senate, where prospects for its passage remain grim.

House Republicans put up the needed votes to pass the continuing resolution before a handful of Democrats added their “yes” votes, for a final tally of 230-197.

A senior Senate Democratic aide said the House support for the CR does not change the caucus’s position to vote against it in the Senate.

Speaker Ryan said that Senate Democrats don't oppose the funding measure, but they're holding the government hostage over immigration.

RNC: Senate Democrats have a choice: support a Schumer Shutdown or fund our troops and health care for millions of children across the country. Republicans have done their job, it’s time for the Democrats to show up to do theirs.

Senate Minority Leader Chuck Schumer (D-NY) is now on the floor, responding to McConnell. Says Democrats will support the motion to proceed to call up the bill because they want to get on the CR. Pushes for a "very short-term" CR to avoid a shutdown.

McConnell and Senate Republicans say there is no urgency, as they can hash out something on immigration before the March enforcement deadline, part of the six-month enforcement delay when the Trump White House decided to have a gradual wind down of the program. The delay was meant to give Congress time to pass a constitutionally permissible DACA fix. Sen. Dick Durbin (D-IL) disagreed strongly with the notion that there is no urgency. He said that hundreds of thousands of lives are in the balance, lives that want to work in America, make a future for themselves and this country, and embrace the American dream. McConnell's first attempt  to adjourn until tomorrow morning was met with an objection from Sen. Angus King (I-ME). Eventually the upper chambered agreed to the adjournment. The shutdown clock keeps on ticking.

Schumer tried to get deal to hold vote at 10 pm et tonight. But McConnell objected. We expect the procedural vote sometime tomorrow now. It needs 60 yeas. But will not get 60 yeas.

Schumer is pushing a 4 or 5 day CR to avoid an immediate shutdown. It does not appear there will be a cloture vote tonight. And they will not resolve this tonight.

Really good back and forth underway now between McConnell/Schumer on the flr now. McConnell says Dems “shoehorned” DACA “into all of this”

Despite Sen King’s protest about adjourning for the night, Senate agreed to adjourn. Back at 11 am et tomorrow

GOP AZ Flake says he won’t vote for cloture to end debate on CR, joining Paul and Graham. Flake would be a no on the CR. Sen Rounds is now a no

Welcome to Shutdown Theater, folks. We’re about a day away before the government runs out of money, which is slated to occur at midnight tomorrow. When Congress averted a partial shutdown prior to the Christmas holiday, Democrats were adamant about one thing: no more continuing resolutions until a host of issues are addressed, even if they’re clean. The insane move of tying immigration to this declaration was born. Democrats wanted Congress to tackle Section 702 of FISA, Children’s Health Insurance Program, and DACA. Two of the three are done. FISA will be re-authorized and CHIP is funded for the next six years in the stopgap measure to keep the government funded that’s under consideration. DACA remains unresolved, though some Democrats have said they think immigration should be a stand-alone piece of legislation. Senate Minority Leader Chuck Schumer (D-NY) said not too long ago that linking immigration reforms to budgetary matters would breed chaos.

Well, the good news is that in the House, the Freedom Caucus is backing the temporary funding measure. We’re still short in the Senate (via Politico):

The House Freedom Caucus said it would support a stop-gap funding bill to keep the government open, likely ensuring Republicans will have the votes to pass the measure on Thursday night. The proposal, however, still faces significant opposition in the Senate. Lawmakers need to pass a funding bill by midnight Friday to avoid a government shutdown.

After a lively party lunch on Thursday, the vast majority of the Senate Democratic caucus emerged in opposition to the GOP proposal.

“I am convinced that between Republicans who publicly said they’re [voting] no and Democrats who said they’re a ‘no,’ there are not enough votes in this chamber” to pass the House plan, said a Democratic Senator, who requested anonymity to discuss the matter freely.

The sentiment was confirmed by a Democratic aide and another senator.

McConnell told his members in an email obtained by POLITICO that he intends to keep the chamber in session through the weekend if a shutdown occurs. Republican senators also discussed the possibility of a much shorter spending bill at a Wednesday lunch, hoping to keep the pressure on Congress to hammer out a large agreement rather than punt on contentious spending and immigration issues.

Katie wrote that Democrats want to shut the government down. We’re now at 50/50 chances that things go dark (so to speak) tomorrow night. Is a government shut down the end of the world? No. But we don’t need this right now during an election year.