Flashback: That Time Schumer Said It Was Insane To Shut Down The Government Over Immigration Reform 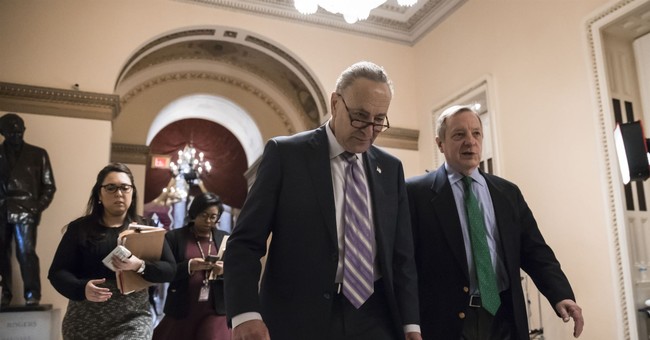 This week, the government will run out of money on Friday, January 19. Once the clock strikes midnight, the government could be shut down, unless a deal over immigration is hashed out this week. Earlier this month, there was some hope. President Trump met with congressional leaders from both parties and allowed the cameras to capture the negotiation process for an extended period of time. There seemed to be consensus over border security and DACA recipients. How to move forward on the policy angle remained to be seen. Yes, there was an ulterior motive with that as well; Trump wanted to dispel that he was totally insane, which is something that’s being peddled by liberals lusting to toss him out of office. It did that, and then there was the “s**thole countries” remark. It sent liberal America into meltdown mode. They blew a gasket, some stroked out.

Democrats said they would not support another government funding measure unless a DACA deal is struck, a notable shift from Democrats in the past. In 2013, during the debt ceiling negotiations, Sen. Chuck Schumer (D-NY) called the legislative strategy of tying immigration reform to budgetary matters—and threatening to shut down the government in the process—as a path that would breed “governmental chaos.” On Sunday, California Attorney General Xavier Becerra appeared on Fox News Sunday with Chris Wallace, where he did his part trashing Republicans, but added that this DACA deal should there be one, ought to be a stand-alone piece of legislation.

…that DACA deal should stand on its own, it should be clean. Worrying about the budget is what republicans and the majority in the House and the Senate should be doing because otherwise the government shuts down. Republicans are threatening to shut down the government unless they get a whole bunch of bad stuff on immigration and I believe Democrats are saying let's do a clean fix on DACA because it has nothing to do with the budget. If we could tie it all together, great, but don't try to hold young people hostage to get a budget and certainly don't try to load up a bill with that stuff whether in the budget or on immigration.

Well, first, even The Washington Post editorial board, which does not agree with a wall, thinks it’s a fair trade-off; a border wall for DACA protections. Second, this is politics. If screwing over DACA recipients hurts Trump and energizes the liberal base, then of course Democrats would hold young people hostage. If it’s a tangible thing in time for the 2018 elections and they retake the House, then the whole negotiation process is flipped. They could get even better terms, but nearly one million DACA recipients will have to live in perpetual fear of deportation. Democrats already bet against the American worker, middle class, and economic growth with their universal opposition to this tax bill. Betting against people and hoping misdirected hostility is directed towards Republicans for their political gain seems to be the Left’s modus operandi as of late. It’s not about helping people; it’s about the narrative. And if a million people have to get screwed over for the long term goal of booting Trump in 2020 and crushing the GOP in 2018, then liberals wills hang out the Hispanics to dry. This is about the maximization of power. Hispanics are probably going to vote overwhelmingly Democratic, so yeah—liberals could roll the dice on this, hoping to retake Congress in the process. The base wants them to do everything to undercut Trump. Giving him funding for a wall would be the ultimate insult.

Then again, there are Democrats who are set on trying to do the right thing on immigration, refusing to give into the blood in the water mentality on the Hill. Sen. Joe Manchin (D-WV), a more right-leaning Democrat from deep red West Virginia, said on Face the Nation yesterday that Trump’s remark’s about s**thole countries was wrong, but added that we have to move on from this and hash out an agreement. He doesn’t want to shut down the government for politics. Manchin also said he would be an honest broker in these negotiations and won’t oppose due to politics. He also said that it wasn’t too long ago that 68 senators voted for immigration reform that included $42 billion for border security, including more wall funding. He also said that every time he has met with Trump, he’s felt that the man wants to do things in a bipartisan fashion (via CBS News):

JOHN DICKERSON, HOST: Some Democrats would like to use this to kind of push Republicans, make them answer for it, be -- particularly use it as way to gain more leverage over getting what they want for policy reasons. Obviously, also, they want to use it to politically hurt the president and his party.

If my fellow colleagues and Democrats in the caucus want to do something with that, that`s wrong. That doesn`t fix anything.

We have a shutdown looming. We have to make sure this government runs and operates in a functional way. It takes all of us working as Americans.

And we have got to move this country forward. We`re the hope of the world. When you look -- and I heard my friend Lindsey Graham saying, America, we`re not just a country of race. We`re a country of ideas, of hopes and dreams all over the world.

Why can`t we espouse and do that and make that dream come true? People have to have that opportunity. We need more border security, John.

In 19 -- I mean, in 2013, 68 senators, John, Democrats and Republicans, voted for a mammoth overhaul to immigration. John, we had $42 billion that was going to be spent for border security. That did include more wall. It included technology, more border agents.

It did everything to secure our border down. And the people coming here, we should know they`re coming for the right reason. But they also should be coming for the dream of America. We can`t shut that down, nor should we.

But we should be much more selective, careful, and use every ounce of technology to prevent people coming for the wrong reason.

DICKERSON: Let me ask you about this.

This negotiation here is going to be like any negotiation this year, which is going to require 60 votes. You`re always on the top of the list of people the president would need to get those 60 votes in the Senate.

How much outreach have you gotten either from Republicans or the White House on anything in this new landscape, where they`re going to need to get nine Democrats to pass anything?

MANCHIN: Well, first of all, John, I`m glad that we`re back in regular order.

We saw what happened when we tried to operate under the budget reconciliation gimmick with health care repeal and then with the tax cuts. There was no outreach to Democrats, trying to work with Democrats, even myself, being very centrist, more of a conservative nature. None at all.

Now they need nine. I`m going to be there when it`s right. I will be an honest broker when I think there is something that we can do better, and I won`t be against something for the sake of politics.

If I`m going to be against something, it`s because I think there`s a better way to improve it. That`s what I`m going to do, John. And I think we can.

We can get more than nine or 10 Democrats. I think we can have an overall majority, hopefully of 60, 65 or 70, Democrats and Republicans working together. We`re not going to get the extremes. That`s never going to happen.

DICKERSON: Let me ask you, speaking of extremes, government funding looks like it`s going to run out here.

Is there going to be a deal on that, are we headed for another one of these moments?

MANCHIN: Well, first of all, John, shame on any of us if we sit here and say, OK, we`re going to let it run out for the sake of politics and shut the government down.

We can come to an agreement. The president has to stand firm and say, listen, this is a bipartisan deal.

And I truly believe -- and I have said this -- every time I have been in the presence of president of the United States, President Trump, I always felt that he wanted to do things in bipartisan.

I think that, after we leave the meeting, then the hard core comes at him, the hard core of the base, the extremes, come hard at him and changes things a little bit.

I think he`s going to stand firm, we`re going to get something done and move forward, and it`s going to be good for our country.

If only every member of the Senate Democratic caucus were like Manchin we could probably get a lot more done, or at least disagree in ways that don’t border on hysteria. Alas, we can’t always get what we want. If things don’t improve by mid-week and you did have plans to visit D.C. for vacation or a family trip, you might want to reconsider your plans.