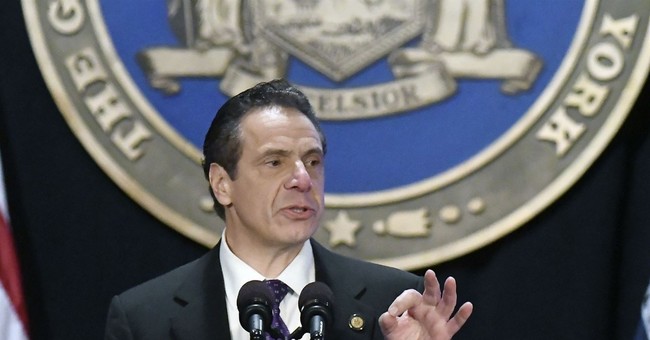 New York Governor Andrew Cuomo is not a fan of the GOP’s tax bill that was signed into law on December 22. He likened it to economic civil war. He pretty much said that it robs blue states to help finance tax cuts in red states. Oh, and it’s the most partisan legislation he’s ever seen. He also argued that it would make it harder to New York to attract businesses. He plans to file a lawsuit (via The Hill):

“We believe it is illegal, and we will challenge it in court as unconstitutional,” Cuomo said during his State of the State address. He called the law "the first federal double taxation in history, violative of states' rights and the principle of equal protection."

The new tax law caps the state and local tax (SALT) deduction at $10,000, which has been a particular concern for elected officials in New York and other high-tax states.

"Washington's tax plan now uses New York and California as piggy banks to finance tax cuts for Republican states," Cuomo said. He added that the law could cause people to leave New York and could make it harder to attract new businesses to the state.

The lawsuit is part of a three-pronged approach for addressing the tax law that Cuomo outlined in his speech.

Prior to the New Year, Cuomo went on CNN and told host Alisyn Camerota that this bill is nothing short of economic civil war against blue states (via RCP):

"One of the really devilish things in the bill, is they eliminate the deductibility of state and local taxes, which sounds like a mouthful, but what it says is up until now, for over 100 years, you paid a state tax, you paid a local tax, you deducted that from your federal tax. They're eliminating that. So you're now paying two taxes -- you pay a tax to the state, or a tax to the local government. And then the federal government taxes that tax," the governor explained.

"And it happens to occur coincidentally on only blue states. Only Democratic states."

"The Senate has no senators from Democratic states, blue states. This tax provision hits the blue states by eliminating the state and local tax deductibility, and uses that money to finance the tax cut in the red states," he said. "This is the most partisan, divisive legislation we have ever seen."

First of all, for the governor who said that conservatives are not welcome in New York, the charges of partisanship are rich. Second, your state was 49th out of 50 in the State Business Tax Climate Index from the Tax Foundation, making it one of the worst for business. Only New Jersey did worse. As always, it seems the Democrats are trying to use the courts to push their agenda, or in this case, trying to repeal a law they thought would never pass Congress. On health care, yes—that’s a safe bet. There are divisions abound in the Senate GOP, as we’ve seen them trip up multiple times on that issue. On taxes, Republicans are quite uniform as to what that should look like in legislation.

We’ll see how this fares in court. In the meantime, 80-90 percent of American families will be receiving a tax cut.