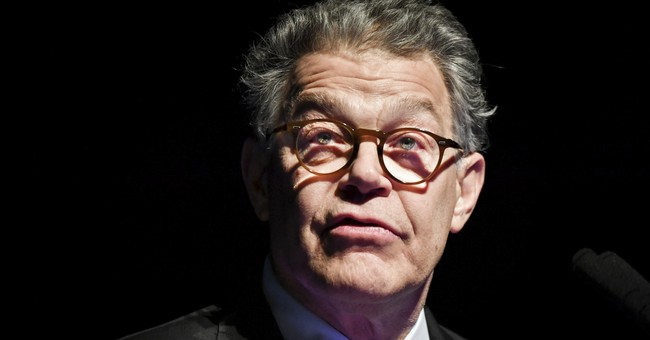 Well, after giving one of the most non-introspective speeches on the Senate floor regarding his sexual harassment allegations, Sen. Al Franken (D-MN) is now a private citizen. The Minnesota Democrat was hit with sexual misconduct allegations around the Thanksgiving holiday last year. He’s been accused of groping multiple women, forcibly kissing one as well. As of today, Stuart Smalley has left the building. Here’s his formal resignation letter:

The Franken allegations arose just as the Alabama special election was winding down. In that race, the Republican Senate candidate, Roy Moore, was hit with serious allegations from multiple women, who claimed the former judge sexually molested and assaulted them when they were teenagers. It proved too much for more than a few Alabama GOP voters. The turnout issue in some key GOP counties was evident. In the end, Doug Jones won, making him the first Democrat to represent the state in the U.S. Senate in nearly a quarter century. Still, prior to Election Day, the Democrats had trouble attacking the GOP since Franken and now-former Rep. John Conyers (D-MI) had troubles of their own. Conyers settled a 2015 sexual harassment claim to the tune of $27,000 in taxpayer money. More than a few feminists started to question the indefatigable defense of Bill Clinton in the 1990s, despite his credible rape allegations. The reason: he was a liberal Democrat. That appears to have been a lifeboat for many Democrats who had behaved badly. Franken surely was banking on that sentiment. It didn’t work. Once Conyers left, Democrats turned on Franken. The situation was untenable. The Left needed to attack Moore and they couldn’t do it with Conyers and Franken in the wings. The flank was vulnerable.

That’s when Franken decided to leave, albeit while not being apologetic and even calling some of his accusers liars.

I’m sure many Democrats feel Franken probably should stay. This was a purely political move. For a bit, the public pressure from the hypocrisy on the Left on this issue twisted the Democrats in a pretzel. In California, the sexual harassment issue has thrown the state Democratic Party into turmoil. More uncomfortable days are ahead for both parties. For now, Minnesota has one less Democrat, with former congresswoman and culture warrior Michele Bachmann possibly eyeing a chance to take the seat.