No, A White House Intern Didn't Throw Up A White Power Sign In Photo Op With Trump 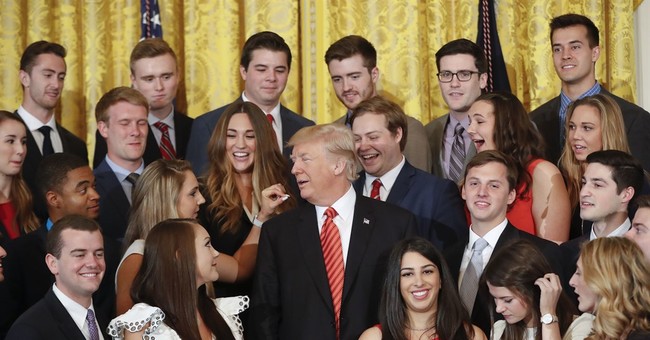 Oh, we’re back to this again. For a White House intern was captured throwing up what many on the Left say is a white power hand gesture in a recent photograph with the president. The picture included President Donald Trump and the fall intern class all had them giving a thumbs up for the photograph, except Jack Breuer, who was giving the ‘OK’ sign, which has been used by virtually everyone. Progressives claim the three fingers form a “W,” while the index finger curling to meet the thumb to form an “O” shape somehow forms a “P.” WP= White power in the land of social media leftism. Has it been used by the alt-right crew to troll the liberal media? Yes. Does it make it an actual white power gesture? No. Even the Anti-Defamation League said this was symbol meant nothing (via Newsweek):

He was a White House Intern.

He recently posed with the President of the United States.

Yep... We have Nazi's in the White House. pic.twitter.com/3gZmWYMxM6

The Anti-Defamation League (ADL) claimed the gesture is not a hate symbol but a hoax started by the anonymous discussion board 4chan. In February, the group said 4chan users went on a mission to confuse social media by arguing that the OK symbol now stood as a sign of white supremacy.

"If someone presents you with a symbol and says it is the big new white supremacist symbol, you should be appropriately skeptical," Mark Pitcavage, a senior research fellow at the ADL's Center on Extremism, said in a May post.

Many Americans began using the symbol to impersonate Trump, who often made the gesture during his campaign speeches.

In some of our intern pictures, I emulated the OK sign the President sometimes makes. That was foolish. I should have listened more closely to the Commander-in-Chief and given the thumbs up. (1/2)

I’m proud of my Jewish heritage and strongly reject the hateful views associated with racist white power organizations. I would never make common cause with them. (2/2)

Now, with that being said, Breuer expressed regret for deviating from the rest of the group in the photo and causing undue drama. He said he was merely emulating the president, as he’s given the ‘OK’ gesture many times on the stump. It’s just something everyone does, but in the era of Trump Derangement Syndrome from the Left—the freak-outs over nothing are pervasive. Breuer has no ties to far right wing groups. He's also Jewish, so he's not a Nazi either. There’s nothing to see here; move along.