Oh, Forget About It: 50 Percent Of Minnesota Voters Want Al Franken To Stay 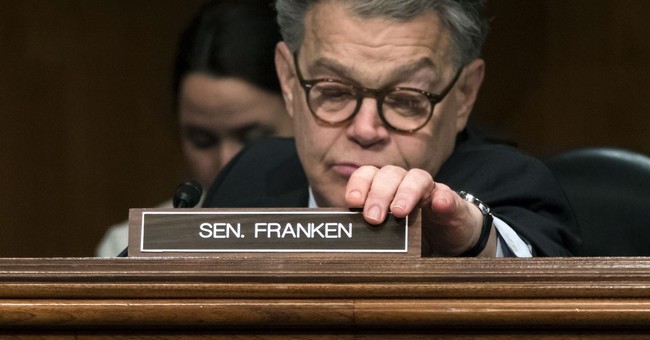 Well, on January 2, Al Franken will no longer be a U.S. Senator. Multiple women have accused the comedian of sexual harassment. In the Me Too reckoning, along with Rep. John Conyers’ (D-MI) exit over allegations of sexual misconduct, his position became untenable. Also, Democrats wanted to renew attacks on Republicans on this issue without having to answer for Conyers and Franken’s conduct. Getting rid of both men allowed the Left to take out the trash and clean the attack slate. Franken obviously didn’t want to go, thinking his liberal disposition could be a life raft. It worked for Bill Clinton, who has been credibly accused of rape. This time, not so much—as Conyers exited, the dam broke. Nearly every Democrat in the Senate said it was time to go. So, he grudgingly announced his resignation after Thanksgiving, without offering an apology—with the added bonus of calling his accusers liars. It was not an introspective moment. Prior to the Thanksgiving holiday, 50 percent of Minnesota voters wanted Franken to resign. His approval rating sunk below 40 percent. And of course, there were was an op-ed saying maybe his resignation was too hastily fashioned.

Now, it seems the voters of Minnesota have changed their tune. Franken’s approval rating has risen, with 50 percent now saying Stuart Smalley should remain in office (via The Hill):

Half of Minnesota voters surveyed in a recent poll don't think Sen. Al Franken (D-Minn.) should go through with his planned resignation.

A new Public Policy Polling survey found 50 percent of voters in Minnesota don't think the Minnesota Democrat should resign in the face of multiple allegations of sexual misconduct.

Now, PPP is a left leaning polling firm, as evidenced by this D+12 poll, though 32 percent of the respondents described themselves as Independents. Still, an oversampled poll of Democrats said Franken should stay. A poll that was majority female said Franken should stay. Most women in Minnesota approve of his job performance. I’m not saying that the allegations between Franken and Alabama Republican Senate candidate Roy Moore were similar; Moore’s allegations were far more serious. Yet, both fit within the realm of sexual harassment. Both were unacceptable. And yet, Democrats in Franken’s home state have done a 180-degree turn. Say what you will about the Moore fiasco, it’s hard to denigrate and bash the supporters of Moore, when Democrats would probably do the same: stand by their guy. Though the exception is that there were enough Alabama GOP voters that found Moore’s actions just a bridge too far, as seen with the turnout issues in some key GOP counties during the special election. Franken is going, but as a popular Democrat after multiple women accused him of groping them, one of which also included forcible kissing. All I can say is, see ya, Stuart Smalley.