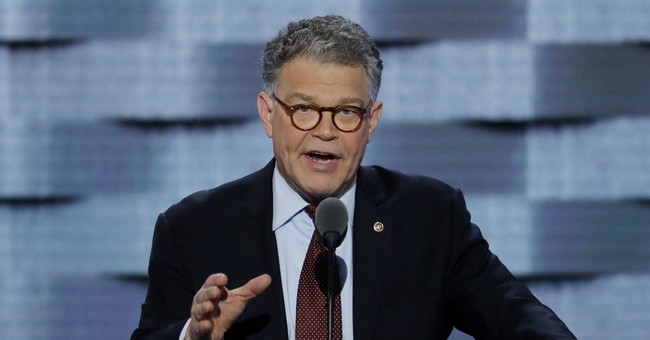 Well, things are getting worse for Sen. Al Franken (D-MN) regarding the sexual misconduct allegations that were lobbed against him. Two more women, who spoke on the condition of anonymity, said that Franken groped them in two separate occasions, once in 2007 and the other in 2008. Both occurred at political events (via HuffPo):

Two more women have told HuffPost that Sen. Al Franken (D-Minn.) touched their butts in separate incidents. These are the third and fourth such allegations against Franken in the past week. Leeann Tweeden, a radio host, wrote last week that Franken had kissed and groped her without her consent during a 2006 USO tour. On Monday, Lindsay Menz accused Franken of groping her at the Minnesota State Fair in 2010.

The two additional women, who said they were not familiar with each others’ stories, both spoke on condition of anonymity. But their stories, which describe events during Franken’s first campaign for the Senate, are remarkably similar — and both women have been telling them privately for years.

In a statement to HuffPost, Franken said, “It’s difficult to respond to anonymous accusers, and I don’t remember those campaign events.”

The first woman, who spoke to HuffPost on condition of anonymity because she’s worried she’ll be harassed online for making the allegation, said Franken groped her when they posed for a photo after a June 25, 2007, event hosted by the Minnesota Women’s Political Caucus in Minneapolis.

“My story is eerily similar to Lindsay Menz’s story,” the first woman said. “He grabbed my buttocks during a photo op.”

The second woman told HuffPost that Franken cupped her butt with his hand at a 2008 Democratic fundraiser in Minneapolis, then suggested the two visit the bathroom together. She spoke on condition of anonymity out of fear that the allegation could affect her position at work.

Franken was first accused by radio host Leeann Tweeden, who alleged she was forcibly kissed and groped by the Minnesota Democrat. It was during a 2006 USO tour in the Middle East. Then, Lindsay Menz said her rear end was grabbed at the Minnesota State Fair in 2010. While Franken’s headaches over could intensify, in Michigan, Rep. John Conyers (D-MN), who has been slapped with sexual harassment claims, says he’s not resigning, despite the Detroit Free Press urging him to do so (via the Hill):

An attorney for Rep. John Conyers (D-Mich.) says the longtime lawmaker will not resign from his post amid a House Ethics Committee investigation into allegations of sexual misconduct.

"If everybody that was facing 'allegations' -- including the President, members of the House and Senate -- resigned, we'd have a lot of unemployed people walking around," he said, adding that the congressman is taking the allegations against him "very seriously."

Reed denied the allegations against Conyers, the longest-serving member of the House.

I think Al Franken should resign from the Senate.

I think Roy Moore should resign from the Senate race and (if the allegations are true) be thrown in jail for many years. https://t.co/eBY4jeABoX

Pollster/data cruncher Nate Silver, who wrote about how Democrats missed their opportunity to maintain the moral high ground in this sexual misconduct reckoning we’re experiencing right now. He also said he thought Franken should resign.  He’s not alone; 50 percent of voters also think Franken should go (via Politico):

A majority of voters think the Senate Ethics Committee should investigate Sen. Al Franken (D-Minn.), and half think Franken should resign from the Senate, according to a new POLITICO/Morning Consult poll.

The poll was conducted after radio personality Leeann Tweeden alleged that Franken groped her in 2006, prior to his Senate tenure — but before a second woman, Lindsay Menz, said that Franken touched her inappropriately while he was a senator in 2010. Still, 66 percent of voters said the ethics panel should probe Franken’s conduct, while only 15 percent think the committee should not look into the matter.

Fully 50 percent of voters think Franken, who has served in the Senate since 2009, should resign, and 22 percent think he should not resign.

As Guy noted yesterday, Stuart Smalley is in a free fall.