WaPo Conservative: An Extra $75 From This Tax Bill Is Nothing For Working Class Families 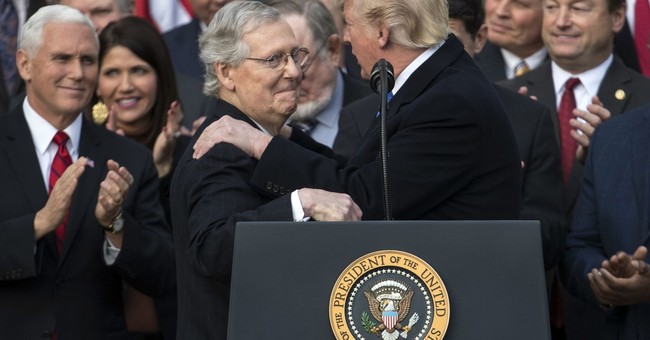 Well, our friends at Twitchy caught this torching of The Washington Post’s Jen Rubin, the publication’s so-called conservative blogger. She slammed First Daughter Ivanka Trump for touting the recent tax reform bill that is slated to become law. Yet, where she really hit the guardrail was when she decided to mock the projected extra $75a minimum wage worker will receive under this plan:

She’d like to tout the child tax credit, but that, too, is less than advertised. Sens. Mike Lee (R-Utah) and Marco Rubio (R-Fla.), who championed the child tax credit, came on board with very little inducement. “Rubio and Lee didn’t get the biggest change they wanted, which was to apply the credit to low-wage workers’ entire income. Under their proposal, a minimum-wage worker making $14,500 would get a $494 tax credit; under the current bill, she’ll get only $75, according to the liberal Center [on] Budget and Policy Priorities.”

Seventy-five bucks would probably cover Trump’s lunch tab at her father’s club, but really does nothing for those low-income families.

If Trump cared to do her homework, she wouldn’t say objectively false things. She wouldn’t treat the pittance that Republicans gave to poor families as a grand accomplishment. Then again, perhaps she has learned at her father’s knee to be a flim-flam artist, a con woman and an entitled child of wealth who looks out for herself and only herself. Those who thought that she’d bring smarts, empathy and reason to the White House sure missed the mark.

It must be nice to have never been poor https://t.co/GIXXwqm0N0

Yeah, $75 goes a long way for working class families, which was pointed out by multiple people who read this piece.

Stop telling people how much money they need. https://t.co/yhf4v2riDt

But please, miss elite "conservative" tell me more about how little money effects me https://t.co/bqx6aBW7mZ

Look in the mirror if you want to see "clueless". An extra $75 for a working class family would help with gas, food, or any number of things. Don't be a condescending elitist. https://t.co/CLDT3MONg4

A member of Washington, DC's bubble of bubble-heads demonstrates her elitism and the "let them eat cake" attitude typical of members of The Swamp. https://t.co/KdWPDd8oTh

Josh Jordan (@NumbersMuncher), which is a good follow on Twitter, was fighting liberals who were mocking the whole notion about how cutting taxes is good, and how what money is projected to be put into Americans’ pockets goes a long way. I know, par for the course on the former, though still hilariously entertaining to watch some on the Left have an utter meltdown over workers getting a taxes cut, but the latter shows the liberal bubble. For example, in one exchange, Jordan aptly noted ways in which $80 or even $18/week in a tax cut, can still make a difference. Part of the liberal hysteria is that the tax bill guts a core provision of Obamacare—the individual mandate—and anything to chip away at Obama’s legacy is considered apocalyptic. Part of it is just plain where the Democratic Party is right now geographically: coastal and urban (and condescending and utterly insufferable). And the last part is just plain Trump Derangement Syndrome. They want this guy to fail. Well, in that endeavor, they risk, as they’ve been doing for months now, overreaching.

There are a lot of policy and process issues with the GOP tax bill, but trying to mock the idea that an extra $80/month helps the average family is not a winning strategy.

Last point here: If you get "only" $18/week in a tax cut and you decide to take your kids to McDonald's so you can have a night where you can just relax and not have to cook - that sure as hell is a perk, and is special when you're both working full time. https://t.co/G7cuCIGszH

The fact that so many sneer at this proves how out of touch so many are to many middle class families. https://t.co/TjDepfzXCT

Sometimes I get the feeling that Donald Trump could have a 20% approval rating and Democrats would still find a way to lose the midterms.