Professor Obama: Yeah, We Could Be Charting Down The Path Of Nazi Germany 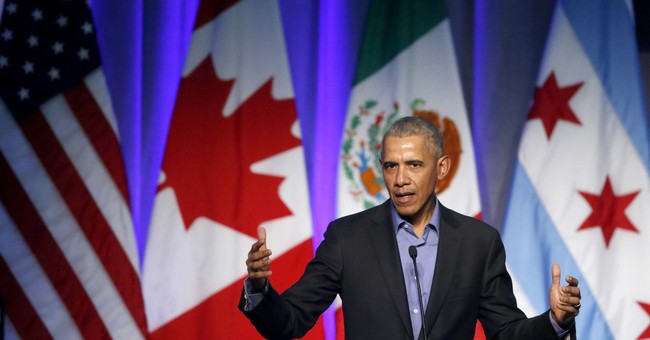 So, this has been said over and over again, but the Left is going to continue to play this tune. We’re not going the way of Germany circa 1939. We’re not. We have constitutional mechanisms that would prevent such a takeover, namely we don’t have an actual official act that would allow the president to assume emergency decree powers after a catastrophic event, such as the Capitol Building being set ablaze by someone. Yet, former President Obama decided to make a warning that the U.S. could be charting down that path at the Economic Club of Chicago this week. It was during a Q&A session. Greg Hinz of Crain’s Chicago Business reported on this event, while adding that the former president also lamented not being more aggressive in enacting anti-gun policies during his tenure in office:

Obama moved from that to talking about a nativist mistrust and unease that has swept around the world. He argued that such things as the speed of technical change and the uneven impact of globalization have come too quickly to be absorbed in many cultures, bringing strange new things and people to areas in which "people didn't (used to) challenge your assumptions." As a result, "nothing feels solid," he said. "Sadly, there's something in us that looks for simple answers when we're agitated."

Still, the U.S. has survived tough times before and will again, he noted, particularly mentioning the days of communist fighter Joseph McCarthy and former President Richard Nixon. But one reason the country survived is because it had a free press to ask questions, Obama added. Though he has problems with the media just like Trump has had, "what I understood was the principle that the free press was vital."

The danger is "grow(ing) complacent," Obama said. "We have to tend to this garden of democracy or else things could fall apart quickly."

That's what happened in Germany in the 1930s, which despite the democracy of the Weimar Republic and centuries of high-level cultural and scientific achievements, Adolph Hitler rose to dominate, Obama noted. "Sixty million people died. . . .So, you've got to pay attention. And vote."

Obama said his greatest "regret and disappointment" was the failure to enact tighter controls on gun possession.

Germany was falling apart, the Weimar Republic was seen as inefficient and lacking authority, and because of that the radical Left and Right were able to eat away at its existence; the latter emerging as one of the most horrific and odious authoritarian regimes in human history. The United States is not the Weimar Republic. We never had a history with monarchies or emperors in the sense that one ruled over us for centuries, as in Germany. This nation was born out of freedom and representative government. Okay—beyond that we’re not like Germany. Also, elections will be held in 2020. You don’t like Trump; vote him out. You want to really stop his agenda; vote Democratic in the 2018 midterms. I think Obama is seriously underestimating the appalling candidacy and campaign that was Hillary Clinton 2016.

As for guns, well, he had to deal with a Republican House and a Democratic Senate that had no shot in clinching 60 votes for…anything he proposed post-Newtown. So-called high capacity magazines, which number in the millions, are already in circulation. It’s an unenforceable gimmick. The so-called assault weapons ban had no chance either; Western Democrats and Republicans made short order of that. Then, we’re back to expanded background checks, which wouldn’t have stopped the Adam Lanza from committing what he did at Sandy Hook Elementary. He didn’t buy any weapons. He murdered his mother and he stole her firearms to commit this act. All firearm purchases are subject to a background check from any dealer with a FFL license. What about private sales? Little data exists of course, but the total number of such sales is probably in the single digits. Most of these transfers are between family members, with the most common probably being a father giving his guns to his son and so forth—a longtime tradition in rural America. Yes, polling swung in favor of gun control after this awful event, but they always return to where the public isn’t all that in favor of banning so-called assault weapons or stricter gun laws. Democrats outside of the urban areas are not going to vote for this; former Sen. Max Baucus (D-MT) plainly said he voted against the Manchin-Toomey bill because his state is pro-gun. At the end of it all, the Obama administration, for all their politicizing, couldn’t get any gun control measures through Congress—and thank God that our Second Amendment freedoms weren’t chipped away. Obama also wasted very valuable time at the outset of his second term losing this battle.