Oh My: Anthony Weiner Is Looking For Pen Pals While In Prison 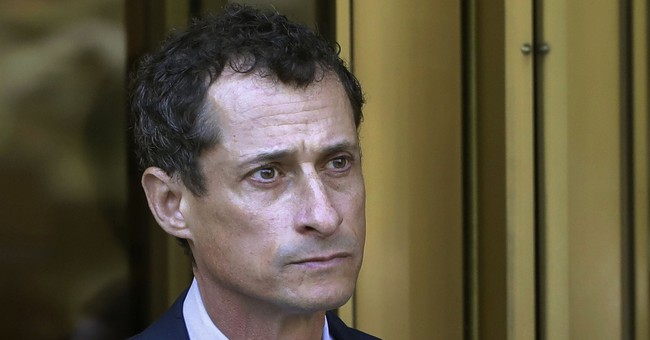 Okay—well, if former Rep. Anthony Weiner (D-NY) wants to just disappear from the limelight, this is certainly not going to accomplish that. The disgraced congressman, who was sentenced to 21 months in jail for sexually explicit communications with a minor, says he wants pen pals while he serves is federal prison sentence. Yeah, Carlos Danger still wants to correspond with folks through paper and pen (via Fox News):

Former Rep. Anthony Weiner, who reported to prison this week to begin a 21-month sentence for sexting with a 15-year-old girl, is hoping to stay in contact with the outside world.

Weiner’s away message on his personal email addresses provide specific instructions on how to stay in contact with the disgraced Congressman, the New York Post reported Thursday.

“Thanks for reaching out,” the message says. “Starting November 6th, I’ll be away for a while but I would love to stay in touch. As quaint as it may sound, the best way to reach me is by sending a letter. When you write, ill get you the information about how email might work.

“So please include your full mailing address here and of course include it when you write,” Weiner says in the message. “And although you didn’t ask — yes, you may send me books via Amazon. (No crockpots or washers/dryers though)”

The investigation into Weiner’s communications led to the FBI analyzing his laptop, which was then revealed to have had emails from Hillary Clinton on them. Weiner’s ex-wife was top aide Huma Abedin and it was later established that the two had shared the device. This was the real October surprise, as then-FBI Director James Comey informed Congress that the FBI would examine these letters just days from Election Day last year. It’s a controversial move that had infuriated Clintonites to this day. Eventually nothing new was revealed, but Weiner eventually pleaded guilty to “transferring obscene material to a minor.” He reported to jail on this week.