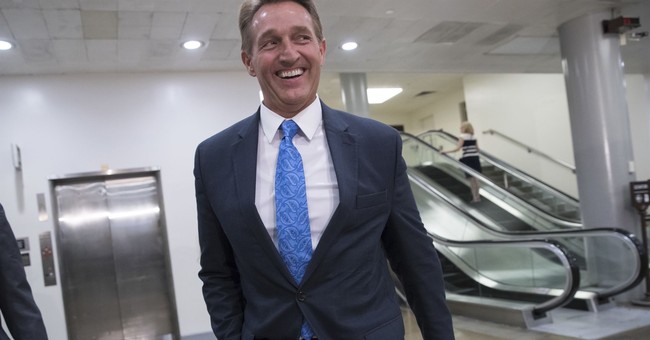 Incumbent Republican Sen. Jeff Flake (R-AZ) is calling it quits. Facing dismal approval ratings and a possible primary challenge, the embattled Republican has decided to retire at the end of his term, according to Politico. Former Arizona State Sen. Kelli Ward was ahead by a whopping 14 points over Flake in an August poll.

As FiveThirtyEight noted, Flake, elected in 2012, won by a narrow three-point margin. He's never been popular, and he represents a state that's trending blue. Yet, it seems as if the primary challenge and whether he could survive played a key role in his decision.

He took to the Senate floor to deliver a full-throated denunciation of Trump.

"We must never adjust to the coarseness of our dialogue, with the tone set up at the top," Flake said. "We must never accept the deadly sundering of our country. The personal attacks, threats against principles and freedoms and institutions, and flagrant disregard for decency."

The decision came with Flake trailing in public polling to former state Sen. Kelli Ward, an arch-conservative endorsed by former White House strategist Steve Bannon who mainstream Republicans consider unelectable in a general election. Rep. Kyrsten Sinema, a progressive-turned-moderate serving her fourth term in Congress, is the likely Democratic candidate in the contest.