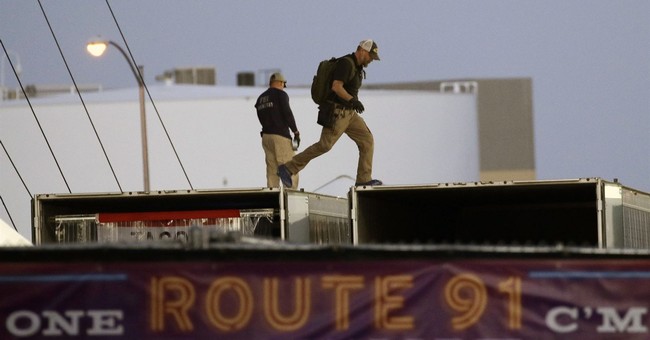 We learn something new every day about Las Vegas shooter Stephen Paddock. The 64-year-old checked into the Mandalay Bay hotel days before he opened fire on concertgoers at the Route 91 Harvest festival on October 1. He used his 32nd floor suite as the vantage point, fired for a little over nine minutes, and wired his room with surveillance equipment before the attack. He killed himself before authorities could breach the door to his room. He had 23 firearms in the room, 12 of which had so-called bump stocks, which increase the rate of fire of a semiautomatic by utilizing the recoil of the weapon when fired.

Yet, the Las Vegas Review-Journal had a source tell them that Paddock reportedly tried to blow up the aviation fuel tanks about 2,000 feet from his room. It was within his line of sight. Bullets did penetrate the fuel tanks, which are situated on land owned by McCarran International Airport, but airport officials told the paper that jet fuel is incredibly hard to ignite, and that anyone who thinks shooting the tanks could set them off has more or less failed terrorism school. It should be noted that we have zero clues regarding what Paddock’s motivations were when thinking about this premeditated attack on innocent people. A construction crew has repaired the damage to the tanks and the FBI inspected the site:

The bullets left two holes in one of two circular white tanks. One of the bullets penetrated the tank, but did not cause a fire or explosion near the Route 91 Harvest country music festival, another knowledgeable source said late Wednesday.

Within the past couple of days, a construction crew repaired the holes, and FBI agents inspected the tanks and took measurements of the line of fire from Mandalay Bay, the sources said.

The tanks are operated by Swissport, the company that runs the fueling operations for the airport, according to McCarran spokeswoman Christine Crews. They primarily are used to provide fuel to the private aircraft operators.

A source knowledgeable about airport operations said jet fuel is hard to ignite and tanks like those across from Mandalay Bay have mechanisms in place to prevent fires.

“A machine gun is not going to blow up a tank of fuel,” Boyd said. “Jet fuel itself sitting there in a big wet pile is very hard to ignite. You have to be a very amateur terrorist to think anything like that.”

Paddock wired $100,000 to the family of his live-in girlfriend, Marilou Danley, in the Philippines. The complexity of this attack seems to point to Paddock having help. Clark County Sheriff Joe Lombardo was quite adamant about that very much being the case yesterday. Days before the shooting, a woman was seen with Paddock and authorities are trying to locate her whereabouts. Paddock killed 58 people and injured close to 500 more in his senseless attack.