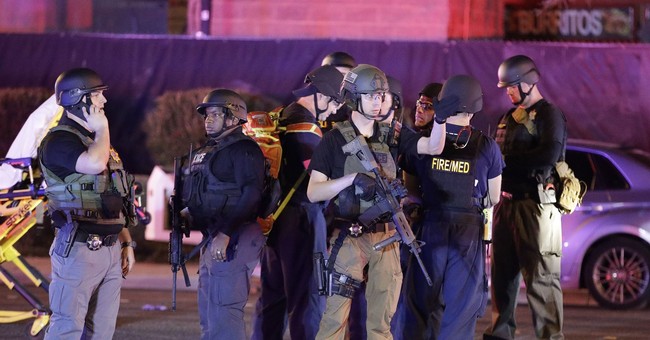 Katie offered us a glimpse of the firearms used by Stephen Paddock to murder 59 people and injure another 527 at the Route 91 Harvest music festival, where 22,000 people were enjoying the event’s last night of performers. Paddock checked into a suite on the 32nd floor at the Mandalay Bay Hotel a few days before his attack. He had wired $100,000 to the family of his live-in girlfriend, Marilou Danley, in the Philippines. Danley is now a person of interest and she recently arrived in the U.S., though she is not officially under arrest. Paddock was an independently wealthy retiree, having made a small fortune in real estate, and was quite the gambler. He brought 23 firearms into the room to carry out this heinous act of murder. The Associated Press is reporting that 12 of the 23 firearms recovered at the scene had devices that would increase the rate of fire, though not convert the firearm into an automatic system. Prior to SWAT teams breaching his room, Paddock shot and killed himself. The shooting itself lasted a little over nine minutes. The devices to increase the rate of fire are called bump stocks (via Associated Press):

Paddock transferred $100,000 to the Philippines in the days before the shooting, a U.S. official briefed by law enforcement but not authorized to speak publicly because of the continuing investigation told The Associated Press on condition of anonymity.

Investigators are still trying to trace that money and also looking into a least a dozen financial reports over the past several weeks that said Paddock gambled more than $10,000 per day, the official said.

The cameras Paddock set up at the Mandalay Bay hotel casino were part of his extensive preparations that included stockpiling nearly two dozen guns in his room before opening fire on the concert below. McMahill said the cameras included one in the peephole and two in the hallway.

“I anticipate he was looking for anybody coming to take him into custody,” Lombardo said.

During the Sunday night rampage, a hotel security guard who approached the room was shot through the door and wounded in the leg.

“The fact that he had the type of weaponry and amount of weaponry in that room, it was preplanned extensively,” the sheriff said, “and I’m pretty sure he evaluated everything that he did and his actions, which is troublesome.”

In addition to the cameras, investigators found a computer and 23 guns with him at the hotel, along with 12 “bump stock” devices that can enable a rifle to fire continuously, like an automatic weapon, authorities said. Nineteen more guns were found at Paddock’s Mesquite home and seven at his Reno house.

Video shot outside the broken door of the room shows an assault-style rifle with a scope on a bipod. The sheriff said an internal investigation has been launched to find out how that footage was obtained.

Bump fire stocks don't actually make the gun fully-automatic. Instead, they use recoil to increase how quickly the trigger can be pulled.

They increase the fire rate well above what normal semi-automatic rifles are capable but not quite to fully-automatic rates.

They are not highly regulated in the same way that actual full-autos are regulated. They're treated as a firearm accessory.

I've fired with a bump fire stock before. They're basically novelty items used for recreational shooting.

Again, “mimic” and other similar phrases are being used to describe these weapons' rate of fire, so I guess AP gets a little credit for making that distinction instead of those who think bump stocks converted these firearms into automatic weapons. That would be illegal, though when have gun laws stopped criminals before. Stephen Gutowski of the Washington Free Beacon, who is also a NRA instructor, has been posting some very good threads on gun laws and other issues relating to this tragic shooting. For starters, the rate of fire increase is close to, but not near the rate of fire for an automatic firing system, hence the difference. It’s mostly used for target practice and shooting sports, and the rate of fire increase is borne from using the recoil to increase trigger pull. With automatic weapons, that's not necessary. Bump stocks are legal, not regulated like machine guns because it doesn’t turn a semi-automatic into one, and are merely seen as accessories. It doesn’t make what happened in Las Vegas any less horrific, but the news media is going to try and pass this off as bump stocks can concert any firearm after 1986 into an automatic weapon. That is false.