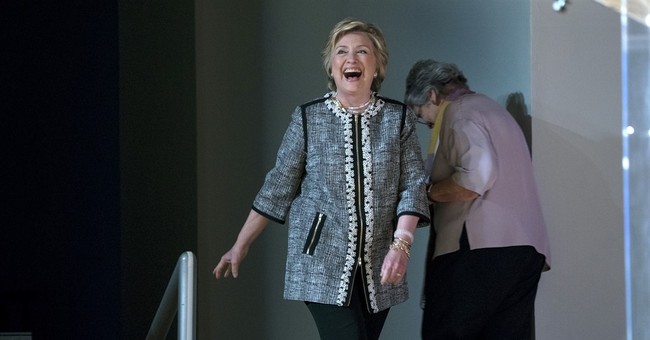 Today is the day. Hillary Clinton’s What Happened has hit the book shelves and now we are going to have to endure a few more weeks of whining from this two-time presidential loser. The silver lining is that Hillary is not running for office again. That doesn’t mean she’s going away. She’s a Clinton. Her PAC, Onward Together, is going to be at the forefront of fighting the Trump agenda and is expected to fund 2018 candidates. So, besides saying that she was responsible for the 2016 defeat, but Russia, James Comey, sexism, Joe Biden, and Bernie Sanders all helped sink her campaign; Clinton also serves up some election advice in her book. She really liked that whole thing about someone not really being a Democrat unless you ooze abortion activism. She wants that as a litmus test (via Emily Jashinsky):

"After the election," she writes, "Bernie suggested that Democrats should be open to nominating and supporting candidates who are anti-choice. Other topics, such as economic justice, are sacrosanct, but apparently women's health is not."

"I don't mean to criticize only Bernie here," Clinton continues, "a lot of progressives join him in thinking that reproductive rights are negotiable."

The former secretary of state also clarifies that she "[believes] there's room in our party for a wide range of personal views on abortion."

"I've been working for a quarter century with Democrats and Republicans alike to reduce the number of abortions, in part by expanding access to birth control and family planning, and we've made progress," Clinton contends. "And I picked as my running mate Tim Kaine, a Democrat personally opposed to abortion because of his Catholic faith but supportive of women's rights as a matter of law and policy."

Yeah Democrats, she’s not leaving quietly, but who expected that. For Republicans, they’ll deal with the Clinton fever that’s about to overtake the airwaves. It’s good fundraising material. For Democrats, it’s bracing for a storm, especially the progressive Left who want nothing to do with the Clinton era anymore. The finger pointing begins again. Democrats would be wise to ignore her little tidbits of advice. She did lose the election and it’s something of an inauthentic gesture to pro-life Democrats who make up 30 percent of the party. We’re going to say piss off to you, but you’re welcome here? Yeah, that plays into the whole unable to craft a message part of the book, right? The truth is Democrats are going to have to suck it up and endorse and inject cash into the campaigns with candidates who trend more to the right if they want to retake Congress. The establishment is fine with this, but it’s anathema to the far left. Who throws the first punch?