AFP Goes On The Offensive In Virginia's Gubernatorial Race 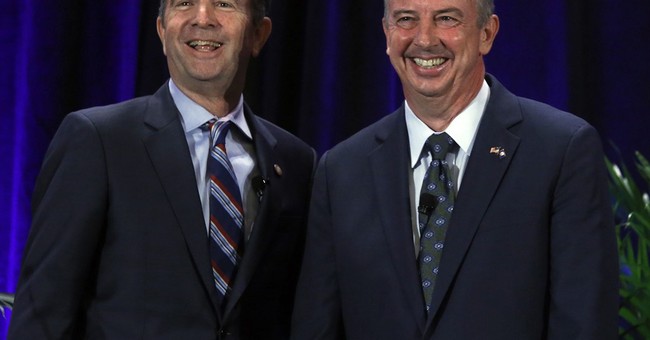 With health care, immigration, tax reform, North Korea, and Hillary Clinton’s new book, you probably didn’t know that Virginia was nearing the end of a gubernatorial election. Republican Ed Gillespie, the former chairman of the RNC who barely lost to incumbent Sen. Mark Warner (D-VA) in 2014, is now running in a dead heat with Democratic Lt. Gov. Mark Northam. It wasn’t always this way—Northam was in the lead by double-digits in the spring. The tables have certainly turned, with both men garnering 44 percent of the vote. Donald Trump lost Virginia to Hillary Clinton by a mere five points and Gillespie is outperforming the president, according to The Washington Post. Still, the publication noted if Trump were not a factor, Gillespie could be ahead by five:

“A small but crucial portion of Northam’s support is coming from voters who are primarily anti-Trump, said Patrick Murray, director of the independent Monmouth University Polling Institute. “Unless one of the candidates breaks out with a clear advantage on Virginia-centric issues, the president could wind up as a decisive factor in the outcome.”

Northam, who called the president “a narcissistic maniac” in a widely seen campaign ad, appears to be benefiting from a Trump backlash. The poll found that if Trump were not a factor in the election, 12 percent of Northam voters would shift their support elsewhere and Gillespie would have a five-point lead.

The poll found regional differences in voter preferences. Northam had a 13-point lead over Gillespie in voter-rich Northern Virginia, 50 percent to 37 percent, and a nine-point lead in the eastern part of the state, 50 percent to 41 percent. The race is about even in central Virginia, with Gillespie at 43 percent and Northam at 41 percent. And Gillespie had an 18-point advantage in the western half of Virginia, 52 percent, to 34 percent for Northam.

Yet, we’ll see what happens. Northam had a trip up on the stump, deciding to skip the Labor Day parade in Buena Vista, Virginia (via Richmond Times-Dispatch):

“I’m sorry Lt. Gov. (Ralph S.) Northam decided not to be here today and broke a long-standing bipartisan tradition,” said the GOP candidate for governor, Ed Gillespie, in a speech after the parade. “I am glad to be here with you today.”

Gillespie promised that if elected, he will focus on economic growth and boosting prosperity by reducing taxes. He was joined by state Sen. Jill Holtzman Vogel, Republican candidate for lieutenant governor, and John Adams, who is running for attorney general.

Northam, the Democratic nominee for governor, attended a 7:30 a.m. breakfast sponsored by the Buena Vista Democratic Committee, but skipped the parade and speeches.

Democratic hopefuls Justin Fairfax, who is the candidate for lieutenant governor, and Mark R. Herring, the incumbent attorney general, also attended the breakfast but left before the parade. The group traveled in helicopters and had previously released a Labor Day schedule of events planned across the state.

It’s not chock full of votes, but perception is everything, as the Cook Political Report David Wasserman noted:

Yes, Buena Vista, VA has a population of 6,618. But fairly/unfairly, skipping its iconic parade plays into multiple harmful narratives...

All tiny Buena Vista asks is for statewide candidates to visit every 4 years and parade/speak in a park. It's really not that much to ask.

To all the "that's not where the votes are" folks: you're right, but campaigns aren't fair. Buena Vista reinforces a negative perception.

Now, Americans for Prosperity is launching their offensive, hitting Northam for missing the vast majority of meetings when he was on the Virginia Economic Development Partnership, which was taken for a $1.4 million ride by a fake Chinese company. The new ad campaign depicts Northam as asleep at the switch and its pretty clear AFP says he will be no different in the governor’s mansion. AFP-VA’s state director JC Hernandez had more in a statement about the recent ad buy:

“As a member of its board of directors, Ralph Northam had a statutory responsibility to supervise the VEDP’s use of taxpayer dollars.  Yet when a fake Chinese company with a false address and a phony website scammed the VEDP and Virginia taxpayers for $1.4 million, Northam didn’t even notice. Why? Because he skipped more than half the board meetings. Northam could have done his job and stopped the fraud.  But he couldn’t be bothered and we got scammed. Ralph Northam didn’t show up for work.

“All summer long our activists have been canvassing the state, getting the word out to friends and neighbors about Northam’s poor record. With this significant ad buy, we’ll be ramping up those efforts even more. We don’t believe Ralph Northam deserves a promotion, and we’re committed to making sure he doesn’t become our next governor.”

The ad will air in markets across Virginia and in Washington, D.C. The ad supplements Americans for Prosperity-Virginia’s broader effort to defeat Ralph Northam, which also includes direct mail, digital ads, and the organization’s hallmark grassroots activism. In August, AFP-VA made tens of thousands of contact efforts to call for the defeat of Ralph Northam.