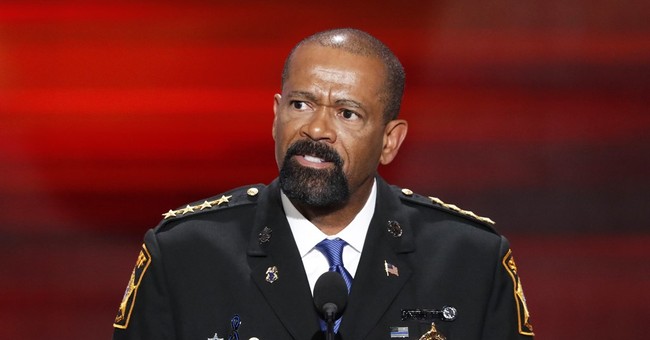 Milwaukee County Sheriff David Clarke resigned this week. People close to the sheriff say this is one step towards his retirement. There was speculation about him taking a job within the Trump administration, while others said he was joining an outside group that supports the president’s agenda. Despite running as a Democrat as sheriff, Clarke has been a regular guest within conservative media for his support of Second Amendment rights, his tough on crime stances, and his support of Donald Trump.

Yet, the controversial sheriff also had some incidents relating to inmate deaths at the county jail that sparked outrage, though it’s unknown if Clarke himself is at fault. He’s never been convicted of any wrongdoing, but that didn’t stop some outlets, like New York Magazine, from calling him a “fascist”:

Milwaukee County rejected Donald Trump’s brand of politics last November by an overwhelming margin. But until Thursday, the area’s top law-enforcement official was a figure so audaciously authoritarian and radically reactionary, he made Trump look like a card-carrying member of the ACLU.

Sheriff David Clarke referred to the Black Lives Matter movement as “black slime” who were bound to “join forces with ISIS” — and “needed to be crushed.” He argued that when police confront anti-Trump protesters, they have a right “to hit first.” When it looked like Trump was going to lose the general election, Clarke tweeted, “Our institutions of gov, WH, Congress, DOJ, and big media are corrupt & all we do is bitch. Pitchforks and torches time.” After Trump won, Clarke called on the commander-in-chief to round up the “hundreds of thousands” of Americans “that are suspected” of sympathizing with ISIS, and “hold them indefinitely under a suspension of habeas corpus [i.e. without trial].”

First of all, that’s was never going to happen, so let’s calm down. Second, you may not agree with Mr. Clarke, but he’s not a fascist. It’s yet another time that those who are against him politically use the term, which has been rendered meaningless thanks to the legions of liberals who simply call their opponents fascist at the first sign of disagreement.

Still, where Clarke’s character could come into question is centered on the jail mistreatment allegations. Reason’s C.J Ciaramella read Clarke’s book, and unsurprisingly did not have a high opinion of him. Yes, Reason is a libertarian outlet and they’re not gung-ho about Clarke’s agenda, but his tenure running the county jail cannot be ignored. Ciaramella noted a 2010 lawsuit filed by Terrance Prude, an inmate, who complained that he was served rancid food:

During his lawsuit, Prude had attempted to force the jail to release the recipe for the loaf, to determine its nutritional content, but the jail refused, even after a federal judge ordered it to do so.

"The defendants' response to his suit has been contumacious, and we are surprised that the district judge did not impose sanctions," Posner wrote. "The defendants ignored the plaintiff's discovery demands, ignored the judge's order that they comply with those demands, and continued their defiance even after the judge threatened to impose sanctions."

The judge kicked the case back to district court, but several days before the trial was set to begin in 2013, the insurer for the jail's food contractor reached a five-figure settlement with Prude.

After Clarke was removed as superintendent of the House of Correction in 2013—no mention of it in his book—the first thing his replacement did was get rid of the nutriloaf. (He also discontinued Clarke's ego-stroking requirement that guards salute officers.)

Yet, let’s be fair. The Washington Times offered their counterpoint to these allegations. They were responding to the NY Mag article:

Those matters have been widely reported by the left to show Clarke’s unfitness to serve as sheriff. They’ve also been refuted and challenged by the sheriff’s department.

The death of the inmate due to dehydration has led to a lawsuit by the family of the victim — a suit that names eight jail supervisors, 14 correctional officers, numerous jail-based medical professionals, the county and Clarke. In other words: anyone and everyone who might have played a part in the inmate’s dehydration death. But all that’s not the same as concluding Clarke was complicit or guilty.

Progressives, Democrats and those of left-leaning minds abhor Clarke — as they did and do Maricopa’s Joe Arpaio — because he’s tough-talking on crime and he puts the law first, and he’s not frightened to take on those who seek to subvert the law for political or personal purposes. That makes him hard to manipulate — and that makes him a natural enemy of the left.

So, we’ll see how those legal matters turn out. It may turn out that Clarke is a bad guy, or maybe not. One thing is for sure though: he’s no fascist. Yet, that could be the least of his worries on the ad hominem front concerning these inmate mistreatment allegations.