That Time When Democrats Really, Really Liked The Border Wall 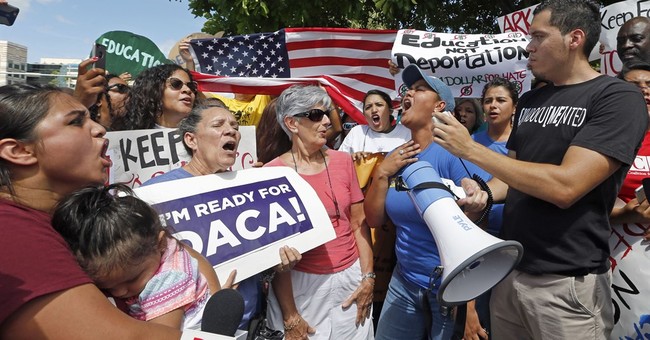 While the nation rallies to help the Houston area after Hurricane Harvey battered the Gulf Coast, it’s inevitable that immigration and other issues will resurface. President Trump has issued a government shutdown threat if Congress doesn’t fund his border wall when they return from the August recess. Guy wrote about a possible deal being floated by the Trump administration to Democrats, which is that he will offer amnesty to the DREAMers, illegal aliens who illegally entered the U.S. as small children with their parents, in exchange for the wall. Of course, Democrats balked, with House Minority Leader Nancy Pelosi saying that children aren’t bargaining chips. Yet, in 2006, Democrats were singing a different tune about the border wall in the sense that a lot of them were for it, including then-Sen. Barack Obama (D-IL) and current Senate Minority Leader Chuck Schumer (D-NY). The Daily Caller reported on Obama’s border wall support back in 2016:

A leaked internal memo from Barack Obama’s 2008 campaign says that fencing at the US-Mexico border could help cut down on illegal immigration.

The memo, which was made public by anti-secrecy organization WikiLeaks, is dated September 7, 2008 and contains a list of immigration promises and proposals.

One of Obama’s “core goals,” according to the memo: “Preserve the integrity of our borders to reduce illegal immigration.”

“Securing our borders will not solve the illegal immigration problem in isolation, but combined with an earned path to citizenship for the undocumented and new legal alternatives to unauthorized entry, some additional fencing could help get the border under control.”

A section titled “Fencing,” says Obama “Supports physical fencing along border under very specific circumstances, where it makes sense as a matter of security and to act as a deterrent to unsafe undocumented entry.”

Well, by progressive standards, Barack Obama is now a racist. Yet, it also shows how insane the Left has become over the past decade. The descent into identity politics and the general shift leftward in political orientation has led the Democratic Party to become insanely out of touch with ordinary Americans, especially in immigration. It’s got to the point where even CNN’s Fareed Zakaria, who is not a conservative, has called out Democrats for their current position on the issue, and that of cultural issues in general. A border wall is not a controversial immigration enforcement measure; Democrats have proven that with their solid support of it in years past.

The Washington Free Beacon found clips of Obama, Clinton, and former Sen. Barbara Boxer (D-CA) all supporting the notion of a border wall.