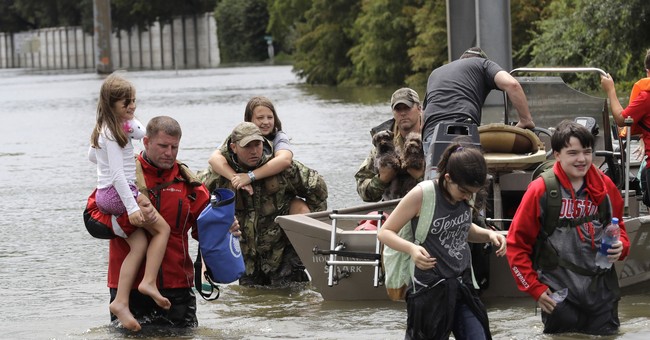 Okay—so, we’re back to this crap again. As Hurricane Harvey is decimating the Texas Gulf Coast, the “oh, now the GOP wants disaster relief after voting against the Sandy relief package” narrative has been creeping its way onto the pages of some media outlets. For starters, have we forgotten that the Sandy package was full of pork barrel spending that didn’t actually go to help the victims of the hurricane? Katie wrote about it back in 2012:

Here's the vote for Sandy aid. 179 of the 180 no votes were Republicans. I count at least 20 Texas Republicans. https://t.co/SEpL2MQdHy pic.twitter.com/X0ruilZplT

$10.78 billion for public transportation, most of which is allocated to future construction and improvements, not disaster relief.

$17 billion for wasteful Community Development Block Grants (CDBG), a program that has become notorious for its use as a backdoor earmark program.

Also, don’t forget the $150 million that was earmarked for Alaskan fisheries (via NY Post):

President Obama’s $60.4 billion request for Hurricane Sandy relief has morphed into a huge Christmas stocking of goodies for federal agencies and even the state of Alaska, The Post has learned.

The pork-barrel feast includes more than $8 million to buy cars and equipment for the Homeland Security and Justice departments. It also includes a whopping $150 million for the National Oceanic and Atmospheric Administration to dole out to fisheries in Alaska and $2 million for the Smithsonian Institution to repair museum roofs in DC.

An eye-popping $13 billion would go to “mitigation” projects to prepare for future storms.

But the Sandy name was on the bill, it was not palatable for fiscal conservatives, and I agree with Legal Insurrection’s Fuzzy Slippers—the Democrats knew it would trash Republicans, who suffered a bruising and demoralizing 2012 campaign season. So, yeah—it’s a bit more nuanced than the evil GOP didn’t want to vote for an aide package. It contained crap spending in it.

While some on the Left and the news media take these pot shots, the residents of Houston are trying to figure out how to survive the hundreds of billions of gallons of rain that have deluged the area. There will be a time to debate and discuss this relief package as well, just not now.

This is bullshit headline and article. The problem wasn't Sandy aid. It was that the Sandy aid bill spent money in places not hit by Sandy. https://t.co/CrREbSaTes