Protesters On Replicas Of Christopher Columbus Ships: Those Are Black Ships Of Death 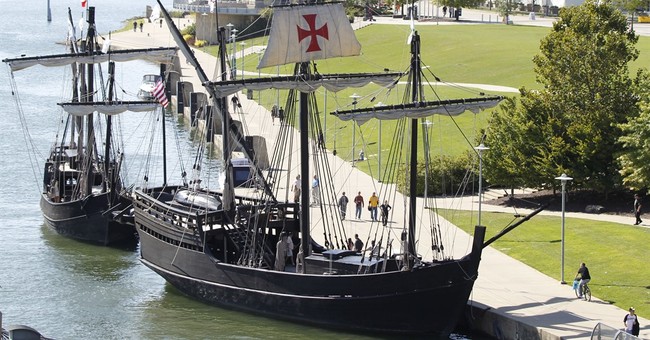 Forget Lincoln, forget Confederate generals, and forget former Supreme Court justices—it’s Christopher Columbus’ turn to be put in the crosshairs of the progressive left. Replicas of the Niña and the Pinta, two of the three ships that sailed with Columbus to the new world, sailed into Traverse City, Michigan, where they were met with protests, some calling them “black ships of death,” while others saying the ships represent nothing but genocide. So, even learning about the discovery of the new world is racist, especially if it’s not done through the revisionist lens of progressives—only they can really teach our true history. Yeah, that’s just crap. Of course, many bad things happened during colonization, but it doesn’t negate the fact that Columbus came here and if ships, the method of transportation in which he arrived here triggers you—you’re just a weak, soft and fragile human being (via 9&10 News):

If #RobertELee is to be erased from history, why not erase #ChristopherColumbus whose arrival ignited genocide of Native Americans?

“That's not right, those things should not be here, they are terrifying, they symbolize nothing but genocide, nothing more,” said Timothy Grey.

A protest on land and water Wednesday night in Traverse City, after the Maritime Heritage Alliance invited the Columbus replica ships to Traverse City for a recreation of history.

“It’s part of history, you have to be respectful and we're here educating the people about the types of ships that were used during the ancient discovery,” said Stephen Sanger, one of the captains. “They’re more than welcome to come down and voice their opinion but we're all here teaching history, you can’t change it.”

The Grand Traverse Band of Ottawa and Chippewa Indians see it differently and even describe them as the black ships of death.

“We're an inclusive people, we're a welcoming people, and we just want the truth to be told and when you have these ships coming in and being celebrated in this way, that's because it’s of a false history,” said Shomin.