Noam Chomsky: 'Self-Destructive' Antifa Is 'A Major Gift To The Right' 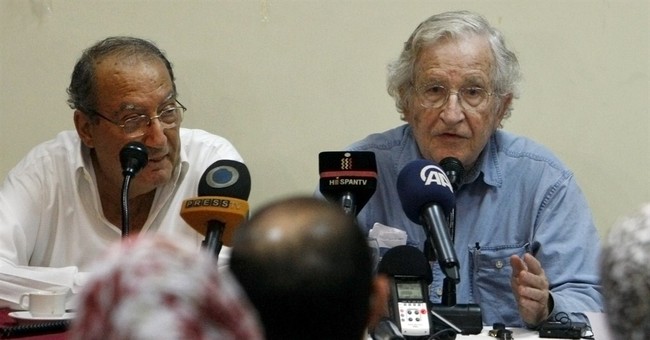 What happened in Charlottesville, Virginia last weekend was a tragedy. Last Saturday, White nationalists flooded the city to protest the removal of a Robert E. Lee statue. Far left Antifa (anti-fascists) protesters also showed up and skirmishes broke out. Scores of people were sent to the hospital. One woman was killed when a white nationalist plowed through a group of counter demonstrators, 19 others were injured as well. That’s what separates this incident. Yes, white nationalists and Antifa are violent thugs, but Antifa did not kill anyone last weekend. Donald Trump’s remarks about the incident may have saved the far left from scrutiny with the media, but they will undoubtedly be back in the news. I don’t think what Trump said was wrong; he blamed both sides for political violence. In general—you cannot have a credible condemnation or discussion of toxic political rhetoric without slamming the far left. Again, with Charlottesville, a person died which changes the game. Nevertheless, CNN’s Jake Tapper noted that reporters at Charlottesville were also assaulted by the far left.

Antifa is just as radical and violent. New York Times reporter Sheryl Gay Stolberg noted that these folks were just as “hate-filled” as the white nationalists who showed up, only to have the progressive Twitter mob force her to retract her previous tweets.  That seems in keeping with the very ideology they claim they want to stomp out. The Washington Examiner spoke with linguist and political activist Noam Chomksy, who said the Antifa movement, is a “gift to the right.” He also said it was “self-destructive.”

The left-wing "Antifa" movement is rising in prominence after clashing with white supremacists in Charlottesville, Va., but one progressive scholar says the anti-fascists feed the fire they seek to extinguish.

"As for Antifa, it's a minuscule fringe of the Left, just as its predecessors were," Noam Chomsky told the Washington Examiner. "It's a major gift to the Right, including the militant Right, who are exuberant."

Many activists affiliated with the loosely organized Antifa movement consider themselves anarchists or socialists. They often wear black and take measures to conceal their identity.

Chomsky said, "what they do is often wrong in principle – like blocking talks – and [the movement] is generally self-destructive."

"When confrontation shifts to the arena of violence, it's the toughest and most brutal who win – and we know who that is," said Chomsky, a professor emeritus of linguistics at the Massachusetts Institute of Technology. "That's quite apart from the opportunity costs – the loss of the opportunity for education, organizing, and serious and constructive activism."

The violence in Charlottesville ended Saturday when an alleged white supremacist drove a car into a crowd of anti-racism activists, not all of whom were Antifa activists, killing 32-year-old Heather Heyer and injuring more than a dozen others. The driver has been charged with murder.

As the saying goes, even a blind squirrel finds a nut. In this case, it looks like conservatives could agree with Chomsky on something: Antifa is pretty terrible as well.