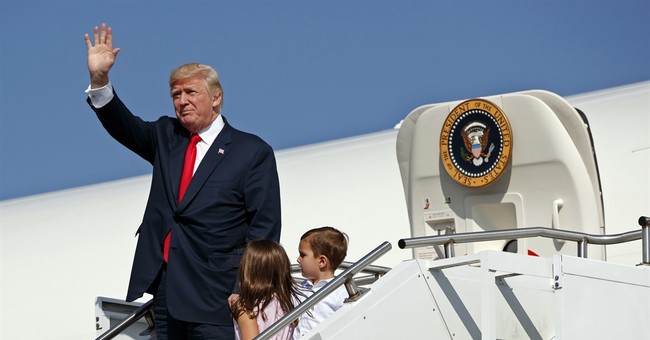 The Washington Post’s Dana Milbank says there is no such thing as a Trump Democrat. To believe this is to deny reality since Donald Trump could have never have broken through the Democrats’ blue wall in Pennsylvania, Michigan, or Wisconsin. You can’t win those states without help from Democrats. Nevertheless, here’s what he had to say in his column:

But new data, and an analysis by AFL-CIO political director Michael Podhorzer that he shared with me, puts all this into question. The number of Obama-to-Trump voters turns out to be smaller than thought. And those Obama voters who did switch to Trump were largely Republican voters to start with. The aberration wasn’t their votes for Trump but their votes for Obama.

It follows for Democrats that most of these Obama-Trump voters aren’t going to be persuaded to vote Democratic in future; the party would do better to go after disaffected Democrats who didn’t vote in 2016 or who voted for third parties.

“Democratic analysts who are looking to solve the party’s problem by appealing to this small group of Obama-Trump voters are pointing themselves to a group that by and large is a Republican group now,” Podhorzer told me. “The bulk of Obama-Trump voters are not fed-up Democratic voters; they are Republican voters who chose Obama in 2012. As such, few are available in 2018 or 2020.” Democrats should instead appeal broadly to working-class voters, he said.

Milbank ends his piece by saying, “What Democrats have to do is be Democrats.” So, again, we have another piece that is meant to help liberal sleep at night. Second, it shows why Democrats might lose in 2018 and 2020. They don’t feel that they’re out of touch; it’s just that everyone else is wrong. That is a classic reaction from the insufferable and condescending urban professional elite. Also, what is this gross assumption that those who voted third party would have voted for Clinton if they hadn’t run? Seventy-five percent of Libertarian supporters would have voted for Trump if Gary Johnson didn’t run last year. That’s based on their own internal polling. Also, the figure wasn’t small. Larry Sabato of the University of Virginia’s Center for Politics found that between 6-9 million Obama voters flipped for Trump. Granted, they’re rough estimates:

Different sources offer varying estimates of Obama 2012-Trump 2016 voters. The ANES [American National Election Study] found that about 13% of all Trump voters cast a ballot for Obama in 2012. Meanwhile, the CCES [Cooperative Congressional Election Study] found a slightly smaller figure of around 11%. Lastly, the UVA Center for Politics poll found that about 15% of Trump voters claimed to have backed Obama four years earlier. Using these percentages (not rounded) and Trump’s overall 2016 vote total, estimates of the raw number of such Obama-Trump voters range from about 6.7 million to 9.2 million.

May want to check President/Senate splits from upstate NY. https://t.co/nyvUwBDJSJ

This is empirically false and the "data" in this piece is partisan farce; were it true, there is no way Trump could have won PA/WI/MI. https://t.co/wCoy05XHRh

Democrats have been Democrats, which led to the GOP taking over Congress, retaking the White House, controlling 69/99 state legislatures, and occupying 34 governors’ mansions. There are 1,000 fewer Democrats in elected offices since 2009. Trump also won because union households voted for him in very healthy numbers, at levels not seen since Reagan. Also, Democrats are performing miserably with white working class voters, so the whole let’s continue on the path of single-payer, political correctness, and other issues to stay woke is going to exacerbate the bleeding.

Also, this column was written as if Trump was some conservative Republican; he’s not. He’s a right-leaning populist, who campaigned on issues that diverted far from the GOP ethos, especially on trade and entitlements. Trump, in some ways, campaigned like a Democrat on some economic issues, touted a job creating-centric message, slammed the media, slammed the establishment, and promised to bring change. He promised to make America great again in economically depressed regions that have often drawn either mockery or neglect from Washington. Clinton’s reaction to all of this was ‘watch this Access Hollywood tape, where Trump says something disgusting.’ No one cared. People are struggling to pay bills, worried about the future, and have a million other things relating to survival than to worry about Trump engaging in some locker room talk.

Also, it’s all about the margins. The fact that Trump was able to cut into unions, and that millions of Obama voters pulled the lever for Trump all contributed to his upset win. Trump had to win over Democrats to win in 2016. That’s a fact. He sure succeeded to that effect. Also, Democrats will have trouble winning these people back after a) Clinton called them deplorable for supporting a Republican and b) the current Democratic leadership unveiled  a rehashed, lackluster recycling of her 2016 agenda, which failed to attract voters. Trump Democrats exist. They helped him win in 2016. Period.