ICYMI: Trump Reportedly About To Blow His Top Over Special Counsel Having Access To Tax Returns 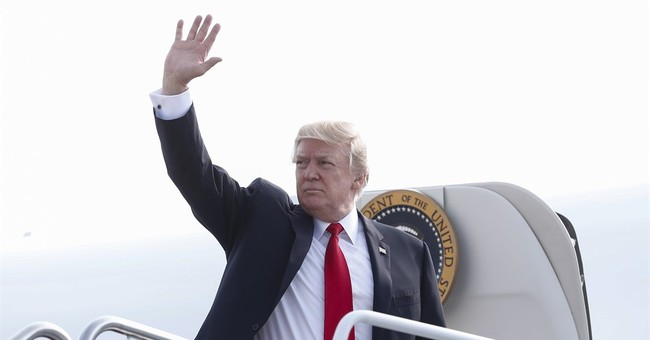 National Review and some other publications seem to think that it’s possible President Trump fires special counsel Robert Mueller. The former FBI director who is heading up the DOJ’s probe into Russia’s involvement into the 2016 election has expanded into Mr. Trumps’ financial dealings; something that the president said would be a red line for him. Granted, he did say that it’s probably not going to get to the point, where Trump fired Mueller, but who knows. NR’s Rich Lowry noted that Trump didn’t sign up for his financials to be put under the microscope. Moreover, and this is something I forgot to add in the post about Mueller last week, the president is reportedly about to blow his top over the news that investigators have access to his tax returns:

Trump has been fuming about the probe in recent weeks as he has been informed about the legal questions that he and his family could face. His primary frustration centers on why allegations that his campaign coordinated with Russia should spread into scrutinizing many years of Trump dealmaking. He has told aides he was especially disturbed after learning Mueller would be able to access several years of his tax returns.

Trump has repeatedly refused to make his tax returns public after first claiming he could not do so because he was under audit or after promising to release them after an IRS audit was completed. All presidents since Jimmy Carter have released their tax returns.

There are some areas of concern, notably that investigations like this have dredged up things that were rather embarrassing to past presidencies. David Graham of The Atlantic noted that Whitewater investigation led to the revelation of Bill Clinton’s extramarital tryst with then-intern Monica Lewinsky:

Take the Trump team’s warnings to Mueller to stick to Russia. The problem is that, as Trump surely knows, business doesn’t stop neatly at international borders. For example: Trump banks with Deutsche Bank, a German bank. Deutsche Bank works with Vnesheconombank, a state-owned Russian bank with whose chief executive Kushner had a questionable conversation in December. Or: Paul Manafort is reportedly being investigated for transactions through Cyprus, where Russian oligarch Dmitry Rybolovlev is chairman of the Bank of the Cyprus; Rybolovlev in 2015 bought a house in Florida from Trump for a huge profit. How does one draw a line between what is “Russian” and what is not?

While Mueller is not speaking to the press, various reports have emerged about the scope of his investigation, and they suggest that Mueller intends to follow each thread as far as he can. The historical precedent, as I have written before, is the Whitewater investigation into the Clintons. That inquiry didn’t end up finding wrongdoing in the 1970s real-estate deal that gave the scandal its name, but once a special prosecutor begins combing over someone’s affairs, he tends to find something. In Clinton’s case, the end game was impeachment in the Monica Lewinsky case, an affair that hadn’t even begun when the investigation opened.

Trump, who has made a career in business out of frequently bending or even simply breaking the rules, may have good reason to be concerned.

The complaint about tax returns suggests two possible worries. One is that he thinks his returns will reveal improprieties or illegal behavior. The other is that Trump’s taxes will show that he is not worth as much as he claims he is, or that they will show that his debt dwarfs his assets. Being revealed to be in debt, or less rich than claimed, might be a strange reason to risk blowing up one’s presidency and by extension reputation and legacy. But Trump has both consistently exaggerated his wealth, attributing huge value to intangible things, and has fought bitterly when anyone has questioned his figures.

When journalist Tim O’Brien wrote that Trump was worth only $150 to $250 million, Trump sued him for libel in 2006, demanding $5 billion in damages. (That’s one way to build up net worth.) The suit didn’t go well. In a deposition for the case, Trump had to admit lying 30 times, and a judge dismissed the suit.

There’s nothing to suggest that anything impeachable will be found, though Democrats are lusting for something to get the ball rolling regarding a serious effort. Rep. Brad Sherman (D-CA) filed articles of impeachment against Trump for obstruction of justice when he fired James Comey, something that was well within his authority to do. Even Comey admitted the president could fire the FBI director at any moment. New revelations about his net worth could ramp up mockery from the Left, which only amounts to a media headache. The point is that these investigations take time. It may be many more months, even years before the final report is released. While it may be a cloud over the Trump White House, the evidence of collusion with the Russians has become more concrete concerning Donald Trump, Jr.’s meeting with a Russian lawyer over possible dirt on Hillary Clinton in June of 2016. Yet, it shows that Trump, Jr. may have been more “collusion curious” in the email exchange, and the notion that no information about the 2016 election was reportedly discussed. It seems likes a bait-and-switch meeting to discuss the Magnitsky Act. The point is take a deep breathe; this investigation won’t be over any time soon.  To add their two-cents, Senate Democrats have warned that firing Mueller would be nothing short of catastrophicfor this presidency .