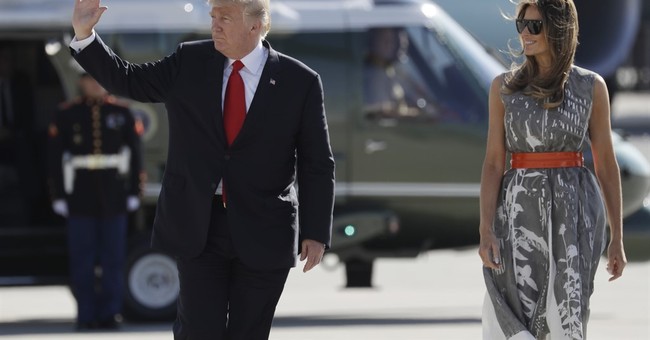 If there’s one thing we know about the Trump administration, besides the Russian collusion clown show that simply will not pack up and go, it’s that it’s leaking like a busted pipe. Seriously, we got more leaks than the Iraqi Navy with this White House. Some of it is staff-related, but the more damning are disclosures of classified information, which are not media speculation; it’s a fact.

In February, Glenn Greenwald discussed these leaks by the so-called Deep State, a collection of career government employees, whose actions are just as troubling as those committed by President Trump. I don’t necessarily agree that Trump is dangerous, but Greenwald is not a conservative. He co-edits a site called The Intercept, which is a sort of safe drop-off zone for leakers. At the same time, Greenwald knows that there’s a difference between leaking information that exposes government behaving badly, and leaks that are meant to undercut a governing administration because some people don’t like how the 2016 election turned out.

Greenwald is highly skeptical of the Deep State and the intelligence apparatus, as they’re not constrained by constitutional controls, like the courts, and therefore—makes their activities more disconcerting. In fact, he’s likened the leaks to a soft coup, and one that is a prescription for the destruction of our democracy. For those on the political Left irked by his indirect defense of Trump, he aptly noted  “1) Trump presidency is dangerous. 2) CIA/Deep State abuse of spy powers to subvert elected government is dangerous. One can cogently believe both” on Twitter. A point he made clear in an interview with the left wing journalist Amy Goodman of Democracy Now at the time:

Even if you’re somebody who believes that both the CIA and the deep state, on the one hand, and the Trump presidency, on the other, are extremely dangerous, as I do, there’s a huge difference between the two, which is that Trump was democratically elected and is subject to democratic controls, as these courts just demonstrated and as the media is showing, as citizens are proving. But on the other hand, the CIA was elected by nobody. They’re barely subject to democratic controls at all. And so, to urge that the CIA and the intelligence community empower itself to undermine the elected branches of government is insanity. That is a prescription for destroying democracy overnight in the name of saving it.

Now, we have Sen. Ron Johnson (R-WI), chair of the Senate Committee on Homeland Security and Governmental Affairs, releasing a report last week that highlighted the harmful the Trump administration leaks have been to national security. The Wall Street Journal’s Kimberley Strassel torched this D.C. “leak crew,” who have committed crimes, endangered our national security, and all of this done to “take out” Trump (via WSJ) [emphasis mine]:

The first 126 days of the Trump administration featured 125 stories that leaked harmful information. Just under one a day. The committee staff judged the stories against a 2009 Barack Obama executive order that laid out what counted as information likely to damage national security. And as it chose to not include borderline leaks or “palace intrigue” stories, that number is an understatement.

For reference, the first 126 days of the Obama term featured 18 stories that met the criteria. Ten of those were actually leaks about George W. Bush’s “torture memo,” which Mr. Obama released.

What’s been disclosed? The contents of wiretapped information. The names of individuals the U.S. monitors, and where they are located. The communications channels used to monitor targets. Which agencies are monitoring. Intelligence intercepts. FBI interviews. Grand jury subpoenas. Secret surveillance-court details. Internal discussions. Military operations intelligence. The contents of the president’s calls with foreign leaders.

The analysis lays out the real and the assumed fallout. One clear example is the May stories hyperventilating that Mr. Trump shared classified intelligence with the Russians. Subsequent leaks suggested Israel provided the intelligence, about Islamic State. This revelation caused a diplomatic incident, and reportedly a change in the way Israel shares with the U.S.

The Johnson report doesn’t go here, but let’s go ourselves: This is lawbreaking, in the aid of a political hit job. The leaking syndicate can’t claim whistleblower status, since it has yet to leak a piece of evidence showing Trump wrongdoing. This is about taking out a president. And with a role model like James Comey —who wrote secret memos with the express purpose of leaking and launching a special counsel—that’s no surprise.

But as Mr. Mueller surely knows, the Espionage Act doesn’t trifle with intentions. As even the nonpartisan Congressional Research Service has noted, leaks enjoy “no First Amendment protection, regardless of the motives,” and no accused leaker “has ever been acquitted based on a finding that the public interest was so great” that it justified unlawful disclosure.

Strassel mentioned in her column that there is bipartisan outrage over the leaks, with former CIA Director John Brennan telling NBC’s Chuck Todd that they’re “appalling.”

Well, there are two different types of leaks. One type is revealing very sensitive, classified information. They are appalling. They need to stop, they need to be investigated, and people need to be held to account, but then there are also leaks about conversations and internal White House intrigue. That is something I think the White House is going to have to get control of. But clearly, as you point out, I think there is a lot that is hemorrhaging out of this administration.

Whether you like it or not, we’re stuck with Trump for at least four years. If you don’t like how the election turned out, that’s tough. If there’s a lesson that liberals and Clintonites need to learn, it’s that in our system of government often times the other party wins. It’s a fact of life. There are no permanent majorities. Public opinion is shiftable sand. Anything can happen. Clinton lost. Get over it. While Greenwald may differ on the subject of leaks, especially concerning legal prosecution, there seems to be a consensus that leaks made solely with the purpose of trying to remove a president are pernicious and borderline treasonous.