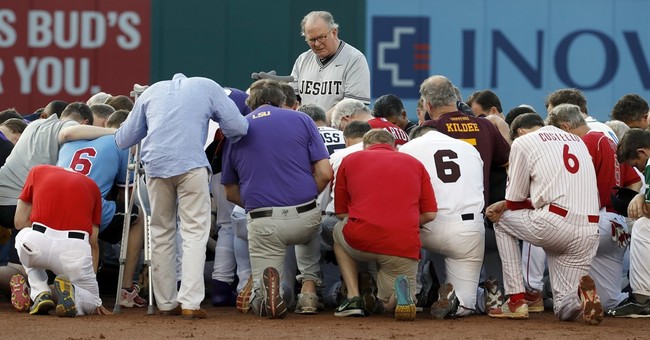 It’s a bipartisan event that garnered new meaning last night. The annual charity congressional baseball game, which pits the Democrats and Republicans and raises hundreds of thousands of dollars for charitable causes, became a source of support and well wishes to House Majority Whip Steve Scalise (R-LA). Mr. Scalise was shot in the hip during baseball practice in Alexandria, Virginia when James Hodgkinson opened fire on the GOP team Wednesday morning. Congressional staffers and two Capitol Police officers were also hit. Hodgkinson was shot by police and later died of his injuries. The Louisiana congressman has undergone three surgeries and remains in critical condition, but he has shown signs of improvement after the second surgery, according to the Associated Press. Rachael Bade of Politico had more:

Scalise underwent his third operation Thursday morning and remained in critical condition at MedStar Washington Hospital Center. The bullet had fractured bones and torn through internal organs, according to a hospital statement late Wednesday night. And Scalise, who suffered severe blood loss, had multiple units of blood transfusions.

On Thursday night, after the latest surgery, the hospital announced that Scalise had “improved in the last 24 hours.” His doctors cautioned, however, that he remained in critical condition and would "be in the hospital for some time.”

President Trump issued a brief taped statement, where he thanked and prayed for the U.S. Capitol Police for their actions that saved lives, along with the Alexandria, Police, Fire, and Rescue teams that responded to the active shooting call.

.@POTUS: "I want to take a moment to send our thoughts, love, and prayers to Congressman Steve Scalise and his entire family." pic.twitter.com/2yTdyiKj5O

“The game will go on,” he said, adding that that the attendees and the members of Congress playing are showing the world that we will no be intimidated by threats. The president offered prayers to the victims of this terrible crime. Trump later said that we’re all here to serve the nation we love, and how that’s a source of unity. He also offered love ad prayers to Rep. Scalise and his family.

Both teams prayed at second base, where Rep. Scalise was positioned at the time he was shot Wednesday. One of the two Capitol Police officers shot, Special Agent David Bailey, threw the first pitch.

In all, 24,959 people attended the game, a record showing. It raised over $1 million for charity. The Republicans got smoked 11-2, but there were no winners or losers last night. It was for the country. Democrats gave the trophy to the Republicans, so it could be placedin Rep. Scalise’s office as he recovers in the hospital.

Democrats gave their trophy to Joe Barton to give to @SteveScalise. Barton tells them "we won't be this nice next year." They lost, 2-11

Congressional Democrats won the baseball game, but gave the trophy to GOPers to put in the office of Congressman Steve Scalise. ???? ??