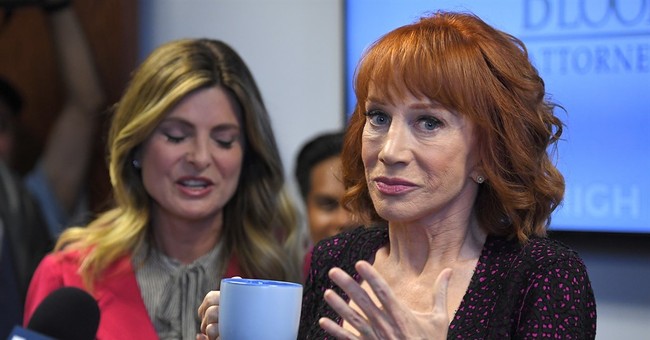 The Left has really shown their propensity to eat their own this week. In the political arena, we have Hillary Clinton blaming the DNC for contributing to her 2016 loss. In the entertainment front, we have comedian Kathy Griffin participating in a horrific photo shoot, where she holds up a bloodied, beheaded Donald Trump. The condemnation was vast and swift. Everyone said it was way over the line. From Mitt Romney to Chelsea Clinton, even die-hard anti-Trump folks like Keith Olbermann, all said the photo went beyond what is acceptable in our discourse. The Secret Service got involved and Griffin later apologized. She took down the photos, but if you thought she was finished—that wasn’t the case. She held a press conference yesterday, where she said Trump “broke” her, and that she might not have a career after this. She also said that she has been subjected to “bullying” by the Trump family. Griffin hired attorney Lisa Bloom, who was present with her during this event.

To @kathygriffin and @lisabloom: you could not be doing more to help Donald Trump if you were Putin. Please stop this selfish nonsense.

Thanks for the mansplain! Super helpful! Will wait meekly for your advice on the right time for a woman to stand up against Trump. https://t.co/zoQx1p9reh

Griffin is the victim? Is this a joke? Lady, you did this to yourself and Mr. Olbermann called her out for being “selfish.” He also said that this absurd presser was doing nothing other than helping Trump. Bloom then shot back at the former ESPN and MSNBC host for mansplaining, adding that they will “meekly” await his advice the next time a women stands up to the president. Bloom and Griffin sure make a gruesome twosome—and both need to get a grip. This is as if you caused a traffic collision by slamming into someone waiting at a red light, and then claiming that you were the victim. It’s nonsense. And to put things into perspective, Bloom is the daughter of well-known feminist attorney Gloria Allred. Allred represented three women who accused Donald Trump of sexual harassment during the 2016 campaign.