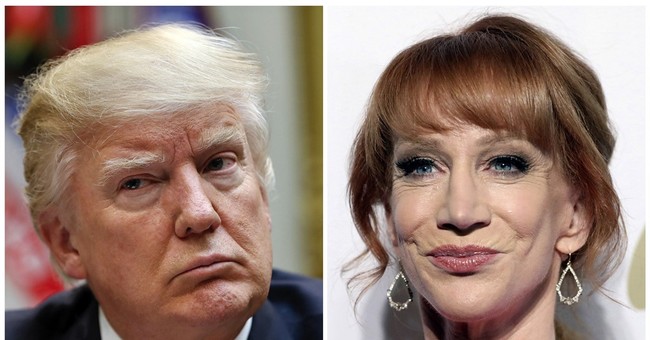 Comedian Kathy Griffin and attorney Lisa Bloom held a press conference Friday to talk about the controversial photo of Griffin holding up a bloody, severed head that resembled President Trump and the 'bullying' she has endured from the Trump family ever since.

"I make mistakes, if you don't stand up you get run over. What's happening to me has never happened in this great country. A sitting president of the U.S. and his grown children and the First Lady are personally, I feel, trying to ruin my life forever," she said. "You guys know him. He's never going to stop."

“Kathy did not forget that disgusting remark,” the lawyer said, explaining that it prompted her to team up with a photographer to show “what it would look like if his own insults were turned on him.”

“It was a parody of Trump’s own sexist remarks taken to an extreme,” she added.

Griffin stood by her apology and said she never intended the image to come across as a threat to the president, or suggest that she advocated violence against anyone.

When she realized that was how it was being taken, she took it down and issued an immediate apology.

“That should have been the end of it,” Bloom said.

The backlash to the photo has been sexist, both women argued, pointing to male artists like Marilyn Manson who’ve gotten away with similar stunts.

But the focus of the presser was on the "bullying" Griffin has endured from the first family over the photo.

Griffin, who broke down in tears at several point throughout the press conference, said she faces death threats, had events cancelled, lost her jobs, and is being investigated by the Secret Service.

“The message is clear,” Bloom said. “Criticize the president, lose your job. And that’s what happened to Kathy and more as a result of the first family’s bullying of her.”

Trump said in tweet about the image that “Kathy Griffin should be ashamed of herself. My children, especially my 11 year old son, Barron, are having a hard time with this. Sick!”

Griffin said despite the backlash, she won’t stop using Trump in her comedy sketches.

"I'm going to make fun of him more now. I have no desire to hurt anybody,” she said. “They are using me as the shiny object so that no one is talking about this FBI investigation. I made a horrible mistake and horrible call."