Pelosi: Saying 'President Trump' Is Hard For Me 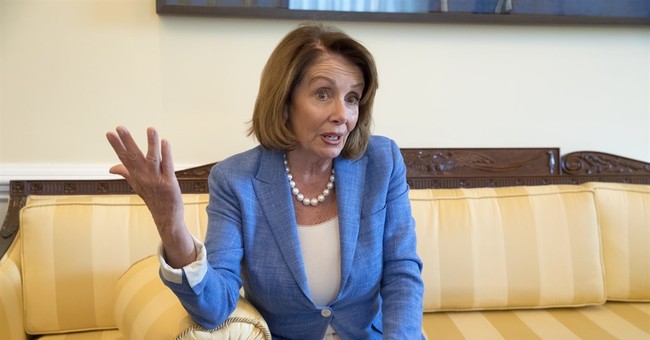 There are some people more broken up about Hillary Clinton’s loss than others. Film director Joss Whedon has certainly taken those feelings to the extreme, saying that he was happy his mother had passed away because Trump is president on Mother’s Day. This was after he mocked cancer survivors visiting House Speaker Paul Ryan. In terms of members of Congress, well, House Minority Leader Nancy Pelosi (D-CA) said she has trouble saying “President Trump" at a Commonwealth Club of California event this week (via The Hill) [emphasis mine]:

At one point during a discussion hosted by the Commonwealth Club, Pelosi referenced “the new president of the United States.”

Pelosi, like many other Democrats, had expected their party’s nominee, Hillary Clinton, to win the presidential election over Trump in November. For Pelosi, who was the first female Speaker of the House, the loss still stings.

When Clinton lost, Pelosi said, “it was a blow, I mean, for the country.”

It was a “blow for the country”? It was an election—get over it. The apocalypse is not coming. We will survive. Also, one of the silver linings of this election is that women will vote for whomever they damn well please—and that’s a good thing. They don’t blindly follow these silly gender games the Left obsesses over and was banking on to push Hillary over the top in 2016. Instead, 52 percent of white women voted for Trump, 44 percent overall in the demographic, with 62 percent of white working class women voting to make America great again. If there was a blow to anything, it was to the cookie-cutter demographic games Democrats play to win. A lot of voters, including women, weren’t buying Clinton’s snake oil.

In terms of the difficulty in calling Donald J. Trump “the president,” what are we seven-years old? I didn’t like Barack Obama—at all. I really never had difficulty with calling him the president. He won; he’s president. That’s how it works. In a nation where we have elections to decide who represents us in Washington, often times the other candidate wins. It’s a fact of life. On one hand, Pelosi’s struggles with Trump’s win is emblematic of the Left’s perpetual temper tantrum that old, sick Hillary just didn’t have what it took to win. This, on top of the GOP retaking Congress and all but claiming most of the country save for the cities and the coasts, only pour more salt in the wounds. It’s an epic collapse from their political position from 2008-2009, where many were wondering, wrongly, if this was the beginning of a permanent Democratic majority. Then, the Tea Party wave swept the country.

Mrs. Pelosi, this too shall pass. We will survive, even if members of your party keep taking crazy pills about Mr. Trump and the Russians. In the meantime, grow up and call him “Mr. President” when you see him. It’s already bad enough that you’re a California progressive.