McCain To Democrats Criticizing Lieberman Over FBI Position: He Has More Experience Than All My Dem Colleagues, So Screw Them 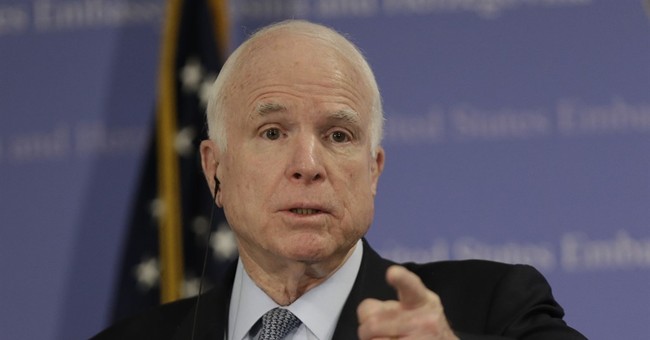 After Deputy Attorney General Rod J. Rosenstein briefed the Senate on the firing of former FBI Director James Comey, scores of senators addressed the press. Sens. Marco Rubio (R-FL), John Cornyn (R-TX), Claire McCaskill (D-MO), Pat Leahy (D-VT), and John McCain (R-AZ) addressed reporters, though McCain failed to officially address the press pool, instead deciding to do a walk and talk by the cameras, but commented on the rumors that former Connecticut Senator Joe Lieberman is being tapped as the next FBI director. Cortney wrote that Lieberman and the president “bonded” during the interview process in which his name ended up at the top of the list. McCaskill voiced her concerns about the potential nominee, saying that the FBI needs someone who hasn’t been elected to office running the nation’s preeminent law enforcement and domestic intelligence agency. Some Democrats were noting Mr. Lieberman’s lack of law enforcement experience.

.@senjohnmccain to me now: "Joe Lieberman has more experience than all of my Dem. colleagues combined. So screw them. And u can quote me."

I was asking @SenJohnMcCain about Dems saying Lieberman doesnt have enuf law enf experience. (He also stopped me from walking into a sign.)

McCain came to the defense of his friend, saying that Lieberman “has more experience than all of his Democratic colleagues combined, so screw them.” In 2008, there were rumors circulating that Lieberman could be picked as McCain’s running mate. McCain reportedly wanted to make that happen. It didn’t, though Lieberman did address the Republican National Convention that year. He also endorsed McCain for president, which caused his Democratic colleagues, with whom he caucused with, some heartburn.