See Ya: Aetna To Completely Withdraw From Obamacare Markets Next Year 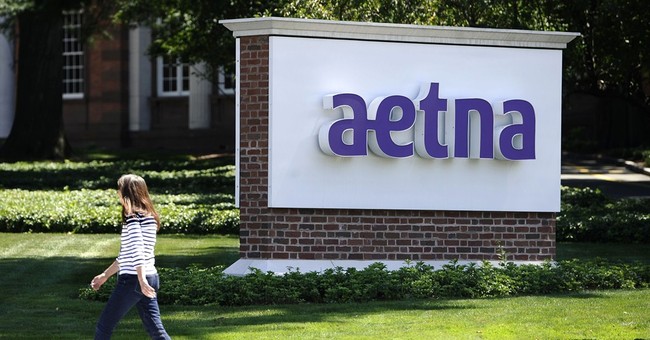 Guy has written extensively on the death spiral of Obamacare. From rising premiums, loss of insurance, and health care companies feeling the financial squeeze, President Obama’s health care overhaul is crumbling. In North Carolina, Blue Cross Blue Shield, which is the state’s largest insurer that offers Obamacare plans to all of its 100 counties, says the financial losses have been immense. CEO Brad Wilson told The News and Observer in February of 2016:

“In year one [2014], five percent of our ACA customers consumed $830 million in health care costs. That’s how much money went out of our door to pay for the heath care for the sickest five percent of the ACA population that we had; we collected $75 million in premiums–between what they could contribute and the government subsidy. Any way you cut it that’s an unsustainable business model.”

They considered leaving the Obamacare market, but decided to increase rates by 25 percent. How is that affordable for the middle class? Well, it’s not. Aetna, one of the largest insurers in the country, had their CEO, Mark Bertolin, recently say that if no changes are made to Obamacare, the death spiral will continue. Ali Meyer of The Washington Free Beacon had more (via Free Beacon):

Aetna's CEO Mark Bertolini said that if Obamacare does not get fixed and nothing happens to it, "it is going to continue to deteriorate."

Speaking at the Fortune Brainstorm Health Conference, Bertolini said the Affordable Care Act needs to be fixed since it cannot be repealed.

"We have a bill that's been passed and quite frankly the current legislature, the House can but not the Senate, cannot repeal it," Bertolini said. "I've spent enough time inside the legislative labyrinth understanding what can be done or what cannot be done under reconciliation, and we cannot repeal Obamacare, ACA, whatever you want to call it, without 60 votes in the Senate."

"What we need to do is admit that it needs to be fixed," he said. "Eight years without touching it, no piece of major social legislation has ever had that happen."

Meyer added that Bertolini said that Aetna planned to exit the Iowa and Virginia health care exchanges due to the financial losses. Now, the company is removing itself from the Obamacare markets entirely next year (via Bloomberg):

Aetna Inc. will leave the few remaining states where it had been selling Obamacare plans next year, making it the latest health insurer to pull out of the health law as Republicans attack the program as failing and work to dismantle it.

While the move is likely to attract outsize political attention, the decision affects just Delaware and Nebraska. The Hartford, Connecticut-based insurer already said last year it would pull out of 11 states, and in the last month announced plans to exit Iowa and Virginia.

“At this time have completely exited the exchanges,” Aetna said in a statement Wednesday. The insurer will also stop selling non-Obamacare individual plans in Delaware and Nebraska.

Aetna had indicated it might pull out earlier this month, when Chief Financial Officer Shawn Guertin said the company would take steps to limit its financial losses in the program. Aetna has said it expects to lose more than $200 million on individual health plans this year in the four states where it’s still selling Affordable Care Act plans.

They’re not the first. Guy wrote that Humana planned to make its exit from the Obamacare market after 2017 in February. Again, folks—Obamacare is not working.