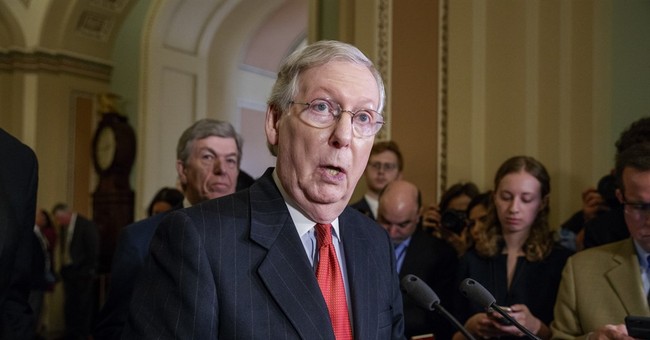 With Friday’s final vote on the Supreme Court nomination of Neil Gorsuch looming, Senate Republicans reiterated that they have the votes to invoke the nuclear option to break Senate Democrats’ unprecedented filibuster. Democrats have formed a united front against President Trump’s nominee, despite him being mainstream, well qualified, and a recipient of the American Bar Association’s highest rating. There is no good reason to block Gorsuch other than political spite. The Left is unhappy that Trump won the election, and that Merrick Garland, Obama’s initial pick to fill the vacancy left by the late Antonin Scalia, wasn’t considered by Republicans via the Biden rule. Sen. Jeff Merkley (D-Or) occupied the Senate floor last night to protest Gorsuch’s nomination, saying that if confirmed—the courts’ integrity would be undermined for decades. He also expounded on how this seat is stolen because Garland’s nomination was foiled.

Now, some Republicans, like Sen. Susan Collins (R-ME), have tried to hash out a deal to avert the nuclear option from being invoked. The Hill reported that those talks have broken down:

Bipartisan negotiations involving as many as 10 senators hoping to avoid a floor blowup over the Senate rules and Supreme Court nominee Neil Gorsuch have collapsed, setting up a partisan showdown on Thursday.

A group of Republicans and Democrats led by Sens. Susan Collins (R-Maine) and Christopher Coons (D-Del.) negotiated intensely in recent days in hopes of reaching a deal to avoid the nuclear option, a tactic GOP leaders plan to use Thursday to change the filibuster rule.

Senate Republicans are poised to hold a simple majority vote to strip the minority party of the power to filibuster Supreme Court nominees — a rarely used and highly controversial tactic that would allow them to confirm Gorsuch without help from Democrats.

The participants revealed their last-minute scramble to reporters Wednesday after it became clear they would not reach an agreement.

“The negotiations with which I was heavily involved have failed to come up with a compromise, which saddens me. There’s so little trust between the two parties that it was very difficult to put together an agreement that would avert changing the rules,” Collins told reporters.

Despite the rather slim margin of error for the Republican majority, Senate Majority Leader Mitch McConnell reaffirmed that he has the votes to push the button (via Associated Press via Santa Cruz Sentinel [emphasis mine]:

…Senate Majority Leader Mitch McConnell claimed the votes necessary to change Senate rules and thwart the Democratic filibuster in a showdown that could alter the course of the Senate and the court.

Asked if he has the votes to do that, given misgivings voiced by many Republicans, McConnell answered simply “yes.”

Democrats tried mightily to keep the focus on Republicans’ plans to change Senate rules, rather than on their own plans to obstruct a nominee who would likely have gotten onto the court easily with no filibuster in earlier, less contentious political times.

On Tuesday evening McConnell officially filed a “cloture” motion, the procedural step designed to end debate on a nomination and bring it to a final vote. That started the clock toward a showdown on Thursday, when Democrats are expected to try to block Gorsuch, at which point Republicans would respond by enacting the rules change. The change is known on Capitol Hill as the “nuclear option” because of the potential repercussions for the Senate and the court.

For the Senate, it would mean that future Supreme Court nominees could get on the court without bipartisan support, potentially leading to a more ideologically polarized court.

Again, this was unnecessary. I would totally understand a Democratic filibuster of a second vacancy, where the balance of the Court could be altered, but this is a conservative...replacing a conservative. The status quo will be maintained. Instead, they’re going to waste their ammunition on someone who isn’t all that controversial. Some are saying that if Collins votes with Republicans on the nuclear option, her moderate label is at risk. That’s outrageous. Obama’s former solicitor general endorsed Gorsuch’s nomination, as have scores of other legal scholars from across the political spectrum. Everyone knows this man is qualified for the Court—even Democrats. Gorsuch’s broad support in the legal realm and the notion that everyone sees this is as a nakedly partisan game executed by Democrats, gives Republicans miles of political cover to nuke the rules and confirm someone that is eminently qualified to be on the Court. There really is no other reason to oppose Gorsuch other than you’re still mad that Trump won the election. Well, get over it. Gorsuch will be confirmed.