Slumber Party: Oregon Democrat Occupied Senate Floor To Protest Gorsuch, Says The Integrity Of The Courts Are At Stake 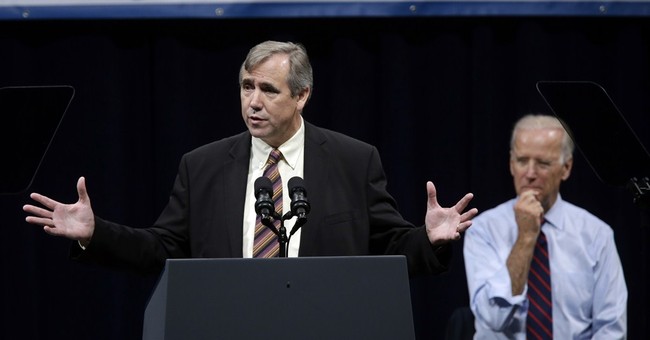 Sen. Jeff Merkley (D-OR) has been one of Judge Neil Gorsuch’s strongest critics. He vowed to block him even before the confirmation hearings. He thinks this is a stolen seat because Senate Republican invoked the Biden rule to block Merrick Garland, Obama’s initial pick to fill the vacancy left by Justice Antonin Scalia. Merkley vowed to hold the floor all night to protest Gorsuch’s Supreme Court nomination because this is how the Left behaves in the Trump era: totally insane. It’s a last stand. The last tantrum he can throw before Senate Republicans hopefully nuke the filibuster rules to confirm Gorsuch by Friday. The Oregon senator also said that should Gorsuch be confirmed, the integrity of our legal system could be undermined for decades.

Merkley is talking all night in opposition to Gorsuch. https://t.co/EkbMi6H7RV

Make no mistake: this is a stolen seat–& if this theft is completed, it will undermine the integrity of the court for decades. #StopGorsuch

As Merkley occupied the Senate floor, let’s not forget that it’s just another episode of Hypocrisy Theater. Merkley in 2014 said that the advice and consent was never intended to be used to block a presidential nomination by the minority party:

The new rules have made it easier for the Democratic-controlled Senate to approve most of President Barack Obama’s nominees, since they need just a majority of the Senate to move forward, as opposed to the 60 votes previously required to clear a procedural hurdle. Now, however, Republicans have taken control of the Senate. If the GOP holds the upper chamber and retakes the White House in 2016, Democrats won’t have the 60-vote filibuster available to block controversial nominees.

“It should be a simple majority,” Merkley insisted in an interview with The Huffington Post, adding that he would stand firm even if Republicans keep the Senate and gain control of the presidency two years from now. “Not long ago, Supreme Court justices who were highly controversial — it was a simple majority. ‘Advice and consent’ was never envisioned as a check that involved a minority of the Senate being able to block a presidential [nomination].”

In October of 2016, The New Republic asked if Senate Democrats would nuke the filibuster over Supreme Court nomination should Hillary Clinton win the election, Merkley said:

A rule change should be a last resort,” Senator Jeff Merkley told me from New Hampshire, where he was campaigning for Maggie Hassan. On the other hand, “If there’s deep abuse, we’re going to have to consider rules changes. I’m hoping it doesn’t come to that.”

When he joined Senate Democrats to nuke the filibuster in 2013, he lamented how this procedural tool has been tainted by partisan politics. At the same time, he had no regrets supporting then-Senate Majority Leader Harry Reid’s charge to change the rules.

“The filibuster, once used only on issues of personal principle, is now used regularly as an instrument of partisan politics. It hurts our ability to take on the big challenges we face as Americans. And we need to fix it. We must put an end to the secret, silent filibuster that is haunting the Senate,” he said at the time.

Gorsuch has the support of various legal scholar and colleague across the political spectrum. Heck, even Obama’s former solicitor general endorsed his nomination. The American Bar Association gave Gorsuch their highest rating. The man has impeccable academic credentials. This is just payback. This is abuse of the filibuster by Democrats. This is still the endless rage that seethes through their pores over Hillary Clinton lacking the talent, will, and competitive zeal to win. Yes, Senate Democrats, caving to pressure from their liberal base, have the votes to block Gorsuch. Yet, the GOP seems ready to nuke the filibuster to confirm Gorsuch, which they should. Enough of these delays games. Get the man on the bench. Mr. Merkley, I hope you enjoyed your time railing against one of the most qualified men to ever be nominated for the Court. You still lose.