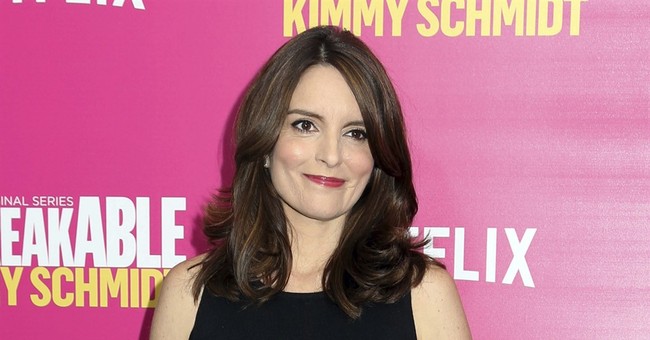 If there’s one thing that liberals hate, it’s when people who they think are on their side decide to be independent of the authoritarian ethos of progressivism and vote their conscience. In this case, it’s women. Trump won 42 percent of the women’s vote overall, which is something that needs improvement—but he won 52 percent of white women. Sixty-two percent of white working class women broke for the president as well. Concerning education 44 percent of college-educated white women voted for Trump. It’s these folks who have become a source of anger for comedian Tina Fey, who on a larger note, demonstrated why liberals lost the election with these remarks at an American Civil Liberties Union fundraiser (via CNN):

Fey called out that particular demographic during a discussion Saturday on access to reproductive care hosted by the American Civil Liberties Union.

The thing that I kinda keep focusing on is the idea that we sort of need to hold the edges, that it's sort of like a lot of this election was turned by kinda white college-educated women who would now maybe like to forget about this election and go back to watching HGTV and I would want to urge them to like 'You can't look away.'

"Because it doesn't affect you this minute but it's going to affect you eventually," she said.

"I personally will make my own pledge as a college-educated white woman to not look away, to not pretend that things that are happening now won't eventually affect me if we don't put a stop to it," Fey said.

This is progressivism in a nutshell. We will make you care. You will heed to our agenda. You will abide by our opinion. We are right. You are wrong. And if you don’t like it, we’ll destroy you—and we’ll relish in your destruction. At the same time, I love how Trump beating old, sick, and crooked Hillary Clinton last November is still driving them insane. The election was some four months ago—and these folks are just euphoric at the thought of Trump failing, thus the country, and hoping that the tens of millions who voted for him, especially college-educated women, are punished and subject to suffer because they want America to fail. If they don’t get what they want, they want the country and everyone who doesn’t think like them to burn.

These people still don’t get it. You lost because partially because no one likes being what to do, especially when it comes to voting. You called Trump supporters deplorable. You’re smug. You’re condescending. And that usually doesn’t yield dividends. You lost. Hillary sucked. And you’re stuck with Trump for the next four, possibly eight years. And we all know Trump’s failure isn’t going to impact you, Ms. Fey or the rest of the Hollywood elite, comfortable in your ivory fortresses paid for by your millions of dollars. And that’s the ironic part. People know you’re going to be safe, which is why they just ignore you. As for Fey not wanting to pretend that this election won't affect her and vowing to be more active, well, her side appears to have a mother lode of participation trophies. I guess she's going to get one.

Addendum: Okay--maybe at time, Fey has been a bit more level-headed.