After Sessions Laid Down The Law On Sanctuary Cities, Here’s The Target List 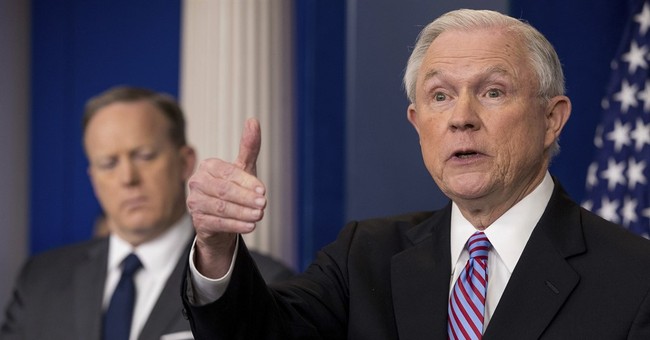 As Katie wrote yesterday, Attorney General Jeff Sessions made a surprise appearance at Monday afternoon’s White House press briefing—where he said that sanctuary cities must obey federal immigration laws or face having their stream of federal dollars cut off [emphasis mine]:

Some states and cities have adopted policies designed to frustrate the enforcement of our immigration laws. This includes refusing to detain known felons under federal detainer requests, or otherwise failing to comply with these laws. For example, the Department of Homeland Security recently issued a report showing that in a single week, there were more than 200 instances of jurisdictions refusing to honor Immigration and Customs Enforcement (ICE) detainer requests with respect to individuals charged or convicted of a serious crime. The charges and convictions against these aliens include drug trafficking, hit and run, rape, sex offenses against a child and even murder," Sessions said. "Such policies cannot continue. They make our nation less safe by putting dangerous criminals back on our streets."

Newsweek has this graphic of the cities and counties that have refused to work with federal immigration enforcement agencies. Most of the cities and counties that refuse to assist in immigration enforcement are unsurprisingly in California. Miami-Dade County, Florida, which is also a Democratic bastion, is the worst offender on the East Coast (771 declined detainers). Los Angeles declined to honor 1,492 detainer requests. Neighboring Ventura County declined 1,049, while Santa Barbara ignored 586. The publication added that DOJ is projected to issue $4 billion in grants this year, but only to cities that agree to obey and enforce federal immigration laws.