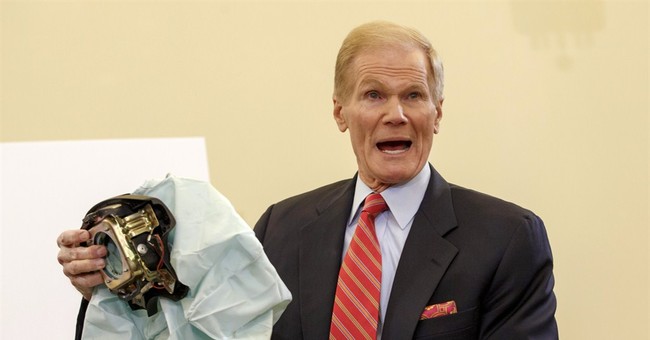 Well, Sen. Bill Nelson (D-FL) opposed a filibuster of Justice Samuel Alito in 2006, but now—thanks to liberal pressure—supports blocking the equally qualified Judge Neil Gorsuch because the balance of the Court is purportedly in trouble, or something (via Tampa Bay Times):

"You've got lots of court of appeals judges; you only have nine Supreme Court justices," Nelson said. "In this divided court, one justice can completely change the outcome."

Republicans also note that Nelson opposed a filibuster of Samuel Alito's Supreme Court nomination in 2006, calling for an up-or-down vote (he was ultimately against Alito) but today stands with Democrats in insisting on a 60-vote threshold.

"You bet I do. The filibuster has always forced the political extremes to come of the middle to build consensus," Nelson said, adding it was a "mistake" for former Democratic leader Harry Reid to lower the threshold on other nominees that were stymied by Republicans.

But detractors say Nelson is having it both ways.

"Senator Nelson has been caught red-handed playing politics with President Trump's mainstream Supreme Court nominee Judge Neil Gorsuch," said Rick Gorka, a spokesman for the Republican National Committee. "The election is over. It is time for Bill Nelson to get to work and take his own advice: Judge Gorsuch deserves an up-or-down vote."

INBOX: @SenBillNelson is a no on Gorsuch

Fact check: the balance of the Court is not being threatened. Gorsuch is replacing the vacancy left by the late Justice Antonin Scalia. A conservative is replacing a conservative. That means the split is the same; four liberal, four conservatives, with Justice Anthony Kennedy being the swing vote. There is no upsetting of the apple cart with this nomination. Now, a second vacancy is a different story and one would think that Senate Democrats would save their fight to the death for this Supreme Court nomination, but they’re not. Their base is demanding all-out war, even when the party is ill equipped to fight it, especially in a candidate, like Gorsuch, who is eminently qualified to be on the Court. Not to mention, this isn’t about consensus either. That’s unadulterated crap. Both Robert Bork and Clarence Thomas, both equally loathed as much as Scalia by the Left, were never filibustered. Bork’s nomination failed 42-58—his fate was sealed when the Senate Judiciary Committee voted down his nomination—and Clarence Thomas passed by a slim 52-48 margin. The point is that these two men, viewed as spawns of Satan by the Left, weren’t filibustered. If Bork and Thomas are worthy of up-or-down votes, then Gorsuch is certainly worthy of that courtesy.

Jeremy Adler of America Rising Squared said in a statement that there really is no candidate better than Gorsuch—and pretty much everyone, even Obama’s former solicitor general, has said that:

Senator Nelson joining this unprecedented obstruction effort against a superbly qualified judge shows that appeasing the far-left wing of the Democrat Party is more important to him than representing the people of Florida. Judge Gorsuch has been lauded by leaders and experts across the political spectrum and is unquestionably qualified to serve on the Supreme Court. It's clear that if Sen. Nelson is opposing him, there is no GOP nominee he would ever support.

Senate Republicans should get ready to launch that nuclear strike—big league.