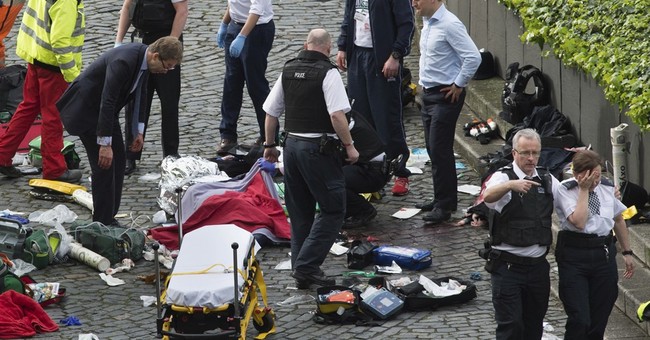 Justin wrote about how British authorities have identified the perpetrator as 52-year-old Khalid Masood. Masood was a British national from Kent, who had prior criminal convictions from terror related activities, but nothing serious enough to bring him to the attention of the UK’s intelligence community. Masood killed at least three people and wounded 29 others when he ran over bystanders at Westminster Bridge. He tried to enter the Palace at Westminster proper before being shot three times and later dying of his injuries. Masood stabbed a police officer in the melee. Seven of those injured were left with catastrophic injuries. In the aftermath of this attack, ISIS has claimed responsibility (via WSJ):

Police identified the suspected Islamist terrorist who carried out the deadly rampage outside Parliament as Khalid Masood, a 52-year-old British-born man who had previous convictions but who Prime Minister Theresa May said wasn’t seen as “part of the current intelligence picture.”

Masood was born in Kent, east of London, and had most recently been living in the West Midlands, police said. He wasn’t the subject of any current investigations, and U.K. authorities had no prior intelligence about his intent to mount a terrorist attack. He had been known to police, however, and had a range of convictions unrelated to terror offenses, police said, the most recent one for the possession of a knife in 2003.

After saying late Wednesday that four people had been killed by the attacker—who rammed a vehicle into pedestrians and stabbed a police officer—police gave a lower death toll Thursday, saying three people had died. Twenty-nine people were in the hospital, seven of them in critical condition.

Yesterday, the UK’s Channel 4 news incorrectly said that the attacker was Abu Izzadeen, a known radical Muslim preacher, who also has been in and out of the British legal system for terror-related offenses. The problem here was that Izzadeen is in jail for failing to inform British authorities that he was leaving the country in 2015. He was given a two-year prison sentence in 2016 for that infraction.